Having been an avid golf fan since I was ten, I was raised on Woods' dominance. But I never warmed to him. Even before the scandal and his subsequent fall from grace, I always routed for the underdog going up against him, whether it was Chris DiMarco, Darren Clarke or Y.E. Yang.

But, even I have to admit, it's better when he's around. As compelling and exhilarating as the last two editions of The Masters have been, with Sergio Garcia's victory and Danny Willett's unlikely triumph before that, Woods' absence has been sorely felt.

END_OF_DOCUMENT_TOKEN_TO_BE_REPLACED

You only had to tune in for a few minutes during the recent Valspar Championship to see what he does for the game. Thousands flock to see this guy. Even at 42, with his body wearied by the multitude of injuries he's endured in recent years, he remains a magnetic presence.

His rejuvenation, which has included almost re-entering the winners' circle at the Valspar - just being edged by Paul Casey - certainly adds another layer of intrigue to next week's Masters.

Having sat out the last two, Woods is clearly raring to go. He's clinched the coveted Green Jacket four times and, given his expert knowledge of Augusta's sweeping fairways and undulating greens, it would be a brave man to bet against him claiming his fifth.

Woods' rehabilitation has been a dominant narrative on the PGA Tour this season and he seems to be acutely aware of it.

In fact, during a recent interview, given to his own official website, Woods spoke of his recent return.

“I’ve been better with each week I’ve competed,” said Woods. “A little more crisp. I’m starting to put the pieces together.”

What he said next, however, has certainly raised a few eyebrows. 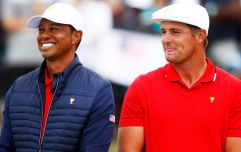 END_OF_DOCUMENT_TOKEN_TO_BE_REPLACED

“I got a second chance on life. I am a walking miracle.”

“They resurfaced a few of the greens, but they still look like they’ve been there for 100 years,” Woods said. “The course was in fantastic shape. My yardage book was basically the same.”

Tiger Woods: "I got a second chance on life. I am a walking miracle.” Hmm....

Has anyone ever declared themselves a walking miracle? Surely a first. Not even Lazarus got up to that caper in his blog.

Via his website today, Tiger Woods says he is surprised at how fast and far he has come. “I got a second chance on life,” he said. “I am a walking miracle.”