The early bird catches the decent round.

With the rest of us only turning over for our second sleep, Tyrone's Darren Clarke and Cork's James Sugrue were spinning rocks on the range. 4.30 in the morning you'd have found them out on the Royal Portrush practice grounds. The alarm had to be set for four.

The amateur preparing for the biggest round of his life. The seasoned pro doing what he always does, no doubt buoyed by the honour of getting strike the first ball of this year's competition.

Off they set and they set off well.

For Clarke, it was a dream opening. The Northern Irish man birdied the first after a delicious approach shot and a solid putting stroke. Sugrue followed him in with a par.

A solid day for these two gents 👌

A solid start in the deep end. Let's not forget, the Mallow native is only 22 years of age. Chat to him a couple of months ago and he wouldn't have had a clue he was coming here.

In the mean-time, winning the British Amateur championship catapulted him into the reckoning but this is a whole new ball-game. He felt the nerves on Wednesday's practice round, wasn't far off hooking it out of bounds on the first.

He didn't though and he looks at home out there now. All the battles and progress made on the Irish amateur circuit paying off. Now he's sharing a locker room with Tiger Woods. 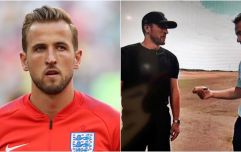 END_OF_DOCUMENT_TOKEN_TO_BE_REPLACED

And once settled, Sugrue looked dangerous. Birdied the second, he belongs here.

And with the run of the course ahead of them and barely a divot to be seen, the two lads went shot for shot, trading the lead at different stages.

Sugrue was out in 35, Clarke the veteran and former champion here was one better. Both of them no doubt enjoying themselves. Down the home stretch they faltered but they recovered too and in they came with two level par scorecards.

You'd take that. Rory McIlroy certainly would, he had a nightmare start while Shane Lowry behind them was burning it up. The Offaly man jostled with American Webb Simpson for the lead in and around the -4 mark.


popular
Paul O'Donovan busts the cliches and leaves the mystery behind him in one more emphatic interview
Ireland's rowing heroes on what everyone was shouting as they beat Team GB to bronze
Next time someone doesn't cut you slack for commuting to training, show them Joe Canning's words
Aidan O'Shea on gym work, training over lockdown and the importance of younger players bulking up
Warren Gatland with great response after being asked if he'll set up Twitter account
People are shocked after finding out how much an Olympic gold medal is actually worth
BREAKING: Grainne Murphy issues heartfelt statement as she retires from international swimming

You may also like
3 years ago
Graeme McDowell pulls out of Open qualifying because his clubs didn't make it to Manchester
5 years ago
WATCH: Pray for poor Paul Casey as he five putts the seventh at Royal Troon
5 years ago
It's 2016 and Muirfield golf club have just voted against letting women join
5 years ago
You'll have to pay to watch the British Open next year as BBC pulls the plug early
6 years ago
You'll forget about Rory's banjaxed ankle after watching these great promos for the Open
6 years ago
The fake Peter Alliss Twitter account reacts to Sky nabbing the British Open
Next Page