Chirping from the gallery on the 13th was not welcome, but the former Open champion kept fighting.

While many others were going low on the opening day of The Open Championship, at St Andrew's, Shane Lowry was engaged in a mighty battle just to stay in touch.

The 2019 Open champion would have seen the likes of Cam Young, Ian Poulter and Barclay Brown [an amateur] going low with early rounds, and targeted a similarly good start. Before teeing off, Lowry was in relaxed form:

END_OF_DOCUMENT_TOKEN_TO_BE_REPLACED

Unfortunately for Lowry, it was not to be. He found himself +3 after four holes, after a disastrous double bogey on the second and a bogey on the fourth. A birdie on the fifth, followed by three pars, steadied the ship.

Then came a nice run around the turn. On the 9th, he drove over the back of the green, chipped to within six feet of the hole and sank a birdie putt. Another birdie followed on 10, as he sank a 35-foot putt. Lowry was back to level par.

END_OF_DOCUMENT_TOKEN_TO_BE_REPLACED

The 35-year-old would have been hoping to get into red figures when he successfully drove the green at the par-4 12th hole. He needed three putts, though, and walked off with just a par, smacking his putter in a small, understandable show of frustration.

On the next hole, Lowry reached the green in two at the 465-yard 13th hole, but way, way back from the hole. Some of the Old Course greens, at St Andrew's, are massive and the Clara native faced a 133-foot birdie putt.

Having dropped a long-range birdie putt, just a few rounds earlier, Lowry would have been confident of getting the ball close enough. As it happened, though, his putt stopped 26 feet short and he was left with a tricky par putt.

From the galleries, in a distinctly Irish brogue, came a piece of advice that Lowry could have done without:

"You should have chipped it, Shane!"

END_OF_DOCUMENT_TOKEN_TO_BE_REPLACED

One player, at least, benefitted from the Lowry birdie putt. US PGA champion Justin Thomas faced a long birdie putt himself, from 115 feet away but on a similar line. Seeing how his playing partner had come up short, he putt some oomph on it and the ball got to within four feet away for a handy par putt.

That 26-foot par putt, for Lowry, was missed and he dropped back to +1 for his round. He was still fighting out there and that was seen on the very next hole as he birdied the par-5 14th to get back to level. 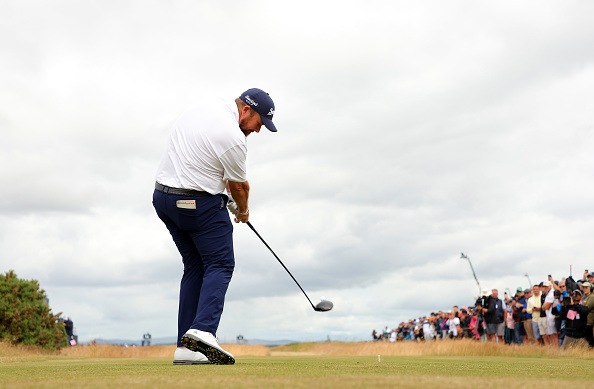 Shane Lowry tees off on the fourth hole during Day One of The 150th Open at St Andrews Old Course. (Photo by Kevin C. Cox/Getty Images)

That birdie on 14 gave Shane Lowry a chance to finish in the red, and under par. However, although he had looks at birdie, it was not to be.

As Lowry finished with consecutive pars, Sky Sports' Ewen Murray described his round well when he said the Irishman was 'plugging away'. Lowry had a nine-foot putt for birdie on the last, but missed it to finish level par on 72. He is eight shots back from leader Cameron Young (-8).

Elsewhere, of the early Irish starters, Seamus Power carded a +1 round of 73, which included a double bogey on the 12th but, more positively, a birdie on 18. Rory McIlroy was out on his own, when he finished up on 18, as second with a -6 round of 66.


popular
Talksport presenter puts Martin O'Neill to the pin of his collar over Declan Rice and Jack Grealish
Roy Keane scores winning goal past Micah Richards in ITV v BBC pundits match
World Cup Power Rankings: The top eight pundits of the tournament so far
Gary Neville sticks up for Ronaldo as contextless pictures and videos taken as gospel
Ballyhale's Colin Fennelly felt Ballygunner's victory speech was disrespectful
"There's no soccer, hurling, or rugby" - Kilcoo's secret to success
'I just became obsessed with football' - Cruciate curse actually a blessing for Sheehan
You may also like
2 months ago
Cameron Smith refuses to answer disrespectful question about Rory McIlroy
2 months ago
Shane Lowry was nothing but gracious when asked about Queen Elizabeth II, after Wentworth triumph
2 months ago
"You've won enough!" - Shane Lowry and Rory McIlroy embrace after Wentworth nerve-shredder
2 months ago
Shane Lowry beats Rory McIlroy to PGA Championship after thrilling finish at Wentworth
3 months ago
Cameron Smith one of six golfers announced as latest LIV Golf stars
3 months ago
'Seeing 18 LIV Golf defectors at Wentworth will be hard for me to stomach' - Rory McIlroy
Next Page