This was out of line. Lowry knew every shot counted.

The excitement levels were off the charts as the PGA Championship came to a dramatic conclusion on Sunday.

The leaderboard was a who's who of golf's greatest talents and over 20 players must have felt they were in with a shout of claiming the year's final Major as play went to the closing nine. 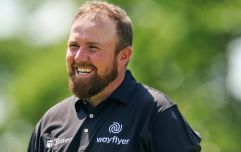 END_OF_DOCUMENT_TOKEN_TO_BE_REPLACED

Shane Lowry and Justin Thomas were two of those within reaching distance of Brooks Koepka, who started the day as leader and who was slowly going up through the gears at Bellerive. At the peaks of the final round, Thomas was co-leader while Lowry was just two shots back.

Their challenges for the Wanamaker trophy faltered on the 16th, however, and there was much controversy on the hole.

Play was held up for over 10 minutes as Lowry sought a ruling, not long after his approach went far right of the green. Lowry's lie was impeded by a temporary stand and he could not take a straight shot to the flag. Two rules officials hemmed and hawed but failed to make a call and the Offaly native was forced to play from the original position.

As the delay was lengthening and scant signs of progress were clear, Thomas was -11 at the time and just two shots back from Koepka but with problems of his own on the hole after going long off the tee. The American was visibly frustrated and voiced that to the officials.

The CBS commentary was none too kind towards Lowry as they perceived his request for a ruling to be ruining any sort of momentum Thomas was trying to build. Many viewers, in Ireland and America, picked up on their dismissive tone about Lowry.

Nice of the CBS telecast team to slate Shane Lowry for looking for a ruling that didn’t involve him playing from behind a portaloo, to ensure he wasn’t to upset dear Justin Thomas. Majestic.

Former US Open winner Graeme McDowell was quick to point out that Lowry had a point about his lie and was right to ask the question.

Big day for Shane as well my man. The boy is trying to shoot the lowest score he can like JT. You get line of sight relief from a TIO if it’s within a club length of your intended line. https://t.co/fxdRQfOKbE

Will Gray from the Golf Channel, meanwhile, offered a reason as to why every single shot was so vital to Lowry, even if he was unlikely to claim his first Major.

Worth noting that Shane Lowry went to Reno last week in an effort to save his Tour card. Currently 156th in points and his 3-year exemption for winning the ‘15 WGC-Bridgestone expires next week.

After that long pause, Lowry's recovery chip failed to make the green and he eventually bogeyed the hole. Thomas did too and he closed out on -10. His playing partner was two more back on -8 in a tie for 12th.

Lowry will pick up just under $173,000 for his finish and it will boost his chances of securing a tour card in the United States, but even finishing on -9 would have earned him close to an extra $50,000. Every shot really counts when you are in Major contention.

After his closing round of 70, the Lowry spoke about the 16h to The Irish Times:

"I think the referee didn’t have the balls to make a decision there and, if he did, I would have had an easier shot. If you put John Paramor or any of the good referees out there and he would have given me full relief. But he wasn’t giving me full relief, he was telling me to drop it in the tree basically.

"I ended up making a good four; if I’d made double I wouldn’t have been too happy with him. It is what it is. It took so long I felt I was getting in Justin’s way, he ended up making bogey as well."

As for Thomas, he was nothing but gracious when he spoke to reporters about the incident.

"No," he began, "it had nothing to do with Shane. The rules officials were having a hard time coming up with a ruling.

"They were kind of looking at each other and saying, well, what do we do and Shane's like, 'Look, just tell me if I get a drop or not'. And I'm a quick player and that's why I went. I didn't have the best of lies so I think the less I thought about it, the better.

"But, yeah, it was just one of those things, he wanted to make sure he got the right ruling because he was still in a position to finish really high in this tournament."

Everyone was getting pumped up on the final day, as golf's star players served up a masterclass, so perhaps the CBS crew got carried away with themselves.

Still, a bit of respect for two players battling for every single shot would not have gone amiss.