"Maybe it was a case I wasn't maybe quite as committed or aggressive as I was yesterday."

Rory McIlroy admitted, after his lacklustre second US PGA round of 71, that 'you're not going to go out and shoot 65 every day'.

The problem was, with advantageous conditions for the afternoon starters and others outstripping his opening round of 65, McIlroy needed to bring close to his best. Instead, what started as a grind ended up as a full-on scrap.

END_OF_DOCUMENT_TOKEN_TO_BE_REPLACED

McIlroy is tied 5th heading into his third round after being the only of the top 10 golfers to go over par on the second day. It was a day when he simply could not find his mojo. As Will Zalatoris (-9) and Mito Pereira (-8) steamed ahead, McIlroy ended up carding a +1 round to start the weekend five shots back.

On the Friday, he was out-scored two shots by Tiger Woods. This, as CBS golf reporter Kyle Porter pointed out, came 12 months after Woods was getting about in a wheelchair after his car crash that almost saw him lose a leg.

Woods is nowhere near what he once was, but it is no surprise given his past knee and back troubles, and coming just over a year after a crash that wrote off his SUV and could have claimed his life. The fight and endurance shown by Woods on both Thursday and Friday was so impressive. He started off with a 74 but his 69, on Friday, was a pleasure to watch.

The issue for McIlroy, it seemed, was that he got swept up along with Woods' battle to make the cut. When his focus should have been on pushing ahead from a leading position, he spent a lot of time walking and talking with, and watching, Woods. 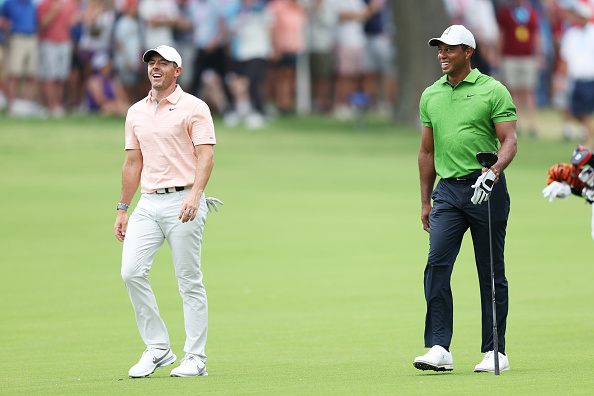 Rory McIlroy and Tiger Woods walk along the 13th hole during the second round of the 2022 PGA Championship at Southern Hills Country Club. (Photo by Richard Heathcote/Getty Images)

Following his round, Rory McIlroy spoke of having a front-row seat for the Tiger Woods show. The 15-time Major winner knew from a few holes before his finish that +4 would have seen him through to the weekend. 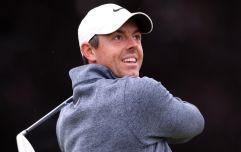 END_OF_DOCUMENT_TOKEN_TO_BE_REPLACED

Not content with just making the cut, Woods wanted to go as low as he possibly could. He birdied 13 and 16 and had looks on 17 and 18, before carding a 69 that had the fans at Southern Hills Country Club standing and applauding.

Almost lost in it all was McIlroy. From being one clear in the US PGA, on Thursday night, he was now five back from Will Zalatoris. Following his round, McIlroy spoke in awed terms about playing alongside Woods.

"I was joking with Joey [Joe LaCava, Tiger Wood's caddie] yesterday and saying, he could have came back and played like Honda and Valspar, two of the flattest courses on Tour. It might have been a bit easier for him, but he comes to two of the toughest walks that we have!

"But yeah, just incredibly resilient and mentally tough. Yeah, to get a front-row seat into... he's feeling it, and he's feeling it on every swing, but to see what he did on that back nine... he missed a few iron shots but he got it up-and-down when he needed to. Made an incredible birdie on 16 to sort of get him inside the cut number a little bit more.

"Look, he's the ultimate pro. Looking at him yesterday, I wouldn't have... if that would have been me, I would have been considering pulling out and just going home, but Tiger is different and he's proved he's different, and yeah, it was just a monumental effort."

Had McIlroy been able to shoot a round of 70, he would have been paired with another friend of his, Justin Thomas, for his third round.

By finishing -4, he will go out with Mexico's Abraham Ancer, 20 minutes before Zalatoris and Pereira tee off. The four-time major winner made some clutch up-and-downs on Friday but he will be better off away from the Tiger Woods spotlight on 'moving day'.

You can stream the weekend's coverage from Southern Hills Country Club in Oklahoma with a NOW Sports Membership. The coverage will begin at 1 pm Irish time.


popular
Liverpool set £60m Mo Salah price as contract talks continue
Two All-Ireland quarter-finals to be streamed exclusively live on NOW
Patrick Vieira claims he was 'much better' than Roy Keane in new interview
QUIZ: How many of the 10 most successful football counties can you name without making a mistake?
Matt Le Tissier says he asked Sky Sports why they never sacked Jamie Carragher
Ex-Real Madrid defender reveals he used to turn up to training drunk
Éamonn Fitzmaurice explains Aidan O'Shea's best position and how it can be used against Kerry
You may also like
1 week ago
Final answer of Rory McIlroy press conference sets us up for thrilling US Open weekend
1 week ago
Rory McIlroy shows uncharacteristic flash of anger before sinking huge putts
1 week ago
Novel suggestion to save PGA Tour would give Rory McIlroy his fifth major
1 week ago
Rory McIlroy takes a brutal dig at LIV Golf ahead of US Open
1 week ago
"It was massive" - Rory McIlroy on shot that helped win Canadian Open
1 week ago
Rory McIlroy could not resist Greg Norman reminder after Canadian Open victory
Next Page