"Was that your dad you hit?"

Not the sort of question Rory McIlroy was expecting to answer as he teed off at Augusta National on Thursday morning.

The four-time Major winner was one of the early starters at the 2021 US Masters and was on even par until he got to the fifth hole. It started to go wrong there, and did not get much better for the rest of the round.

END_OF_DOCUMENT_TOKEN_TO_BE_REPLACED

McIlroy bogeyed five and six, and worse was to follow on the seventh after an errand drive. McIlroy found himself left of the fairway and in among some trees as he tried to get as close as possible to the green.

His approach spat right, however, and hit Gerry McIlroy, his father.

Rory McIlroy hit his dad with a wayward shot at The Masters 😬 pic.twitter.com/dnCPoWiqC1

Luckily for Gerry, and his son, the ball strick him on the back of the leg and he was okay. Asked if that was indeed his dad his shot had struck, McIlroy replied in the affirmative.

The Holywood native bogeyed that hole, too, and dropped to +3. McIlroy carded a birdie on the next, but gave it back to the course on the ninth.

The back nine was a similar grind. McIlroy dropped to +5 at the 13th and only a birdie on the 15th stopped the rot and gave him hope that he could get back closer to par with a closing three holes. 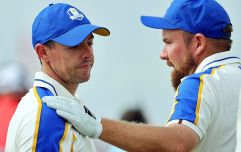 END_OF_DOCUMENT_TOKEN_TO_BE_REPLACED

However, he could only card three more pars to sign off with a first round of 76 for a score of +4. As bad as that looks, scoring was tough on the opening day of the tournament.

"Four over is not the end if tomorrow is decent," observed former champion Nick Faldo, on commentary duty for CBS.

As McIlroy walked off the 18th green, the lead was only -3. That lead was shared by three players, one of whom was 2018 Masters champion Patrick Reed.

Other players finding it brutal out there included Lee Westwood (+6), Scott Wolff (+4) and Sergio Garcia (+4).


popular
Alex Ferguson wrote Mickey Harte a letter - ex Tyrone boss reveals in new memoir
"I'll go back running the roads now and make sure my body doesn't get lazy"
“How it finished was not the way I would have chosen" - Mickey Harte reveals how his time with Tyrone came to an end
"There are clubs in every county that you just know - they like fighting." - Fighting passes on through the generations
GAA at its best as Bellaghy players run into team-mate who buried his father that morning
New footage shows exactly what Deontay Wilder said to Tyson Fury after trilogy fight
Somehow Pat Spillane's 1981 cruciate rehab routine hasn't survived the test of time
You may also like
2 weeks ago
"I told him the absolute truth" - Sergio Garcia on his Ryder Cup talk with Rory McIlroy
3 weeks ago
Padraig Harrington's 12th hole reaction as McIlroy and Poulter roasted needs no words
2 months ago
McIlroy and Lowry right in the mix for Olympic gold in Tokyo
2 months ago
Rory McIlroy's reaction to 14th tee shot slip captured his Open troubles
3 months ago
Rory McIlroy recovers from a hard place to keep US Open dream alive
5 months ago
Rory McIlroy on why he nearly pulled out of Quail Hollow, on Wednesday
Next Page