Irish golfer Paul Dunne is just 36 holes away from securing his place on next year's European Tour after a superb round in Catalunya today.

The Greystones man, who leapt to stardom when leading this year's Open Championship as an amateur, turned pro after helping Great Britain and Ireland win the Walker Cup.

Dunne is one of six Irish golfers in action at the final stage of the tour's Qualifying School in Spain, a six-round war of attrition that will see the top 25 players claim a coveted card for next season. 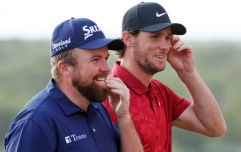 END_OF_DOCUMENT_TOKEN_TO_BE_REPLACED

And with the four-round cut hovering over play today, Dunne carded a superb round of 68 to shoot up the leaderboard to a tie for 18th at eight under par.

Dunne, who turns 23 next week, trails the leaders by six shots but will be more concerned about hanging tough over the final two days to secure his card.

Damien McGrane is also in an excellent position, one stroke ahead of Dunne thanks to a one-under 71, the 44-year-old Meathman trying to retain his playing privileges after a disappointing 2015.

Kevin Phelan (-3) and Simon Thornton (-2) also made the cut but have work to do to climb the leaderboard, while Ruaidhri McGee and Brian Casey missed out.


popular
Andy Farrell goes for Munster veterans as Ireland team to face New Zealand named
The four stone-cold certainties for All-Stars even as early as this
Eamon McGee just couldn't help himself with Armagh-melee tweet
"The economy was one of the big reasons" - Cadogan's move from an electrician to personal training
"He's actually smiling putting the ball over the bar. He should nearly be fainting." - Ryall on Limerick's legacy
Kylian Mbappe reportedly wants PSG to sell Neymar
Gavin Coombes one of four Irish players to push themselves into Test picture
You may also like
2 years ago
The clutch bunker shot that won Jon Rahm €4.5 million in Dubai
2 years ago
Shane Lowry on The Bear's Club, Rory McIlroy and who won their money match
3 years ago
Shane Lowry banks another tidy wedge after incredible finish in Dubai
3 years ago
Shane Lowry wins Abu Dhabi Championship after shot of his life on 18
3 years ago
Shane Lowry gives honest reply when asked where he'd be without golf
5 years ago
WATCH: Heartbreak for Wicklow's Paul Dunne as he loses playoff for first European Tour title
Next Page