Shane Lowry and Padraig Harrington will be hoping organisers pair them up more often after they has a time of it at Kiawah Island, on Sunday.

The Irish duo were in their respective elements as they went around the tough Ocean Course in dual rounds of 69, to finish in a tie for fourth place.

END_OF_DOCUMENT_TOKEN_TO_BE_REPLACED

Harrington was somewhat of a 'heater' for his playing partners at the 2021 PGA Championship. He was paired with Phil Mickelson on Thursday and Friday, and he carded rounds of 70 and 69 to go into the lead of a tournament he would eventually clinch.

Harrington and Matt Fitzpatrick went out together on Saturday and the Englishman carded 72 to give himself an outside chance of chasing Mickelson on the final day.

On Sunday, with was Lowry and Harrington and both men made hay. Speaking to reporters after his round, Lowry was practically beaming. He commented:

"I was kind of trying to cheer him on and play my own game, but honestly playing with Paddy today was one of the best rounds of golf I've ever had. It was so much fun.

"The two of us had that coming off, we're obviously grinding it out to beat each other and trying to do well in the tournament... it was one of the best days I've had on the golf course. I played lovely golf again and very happy going into my week off now." 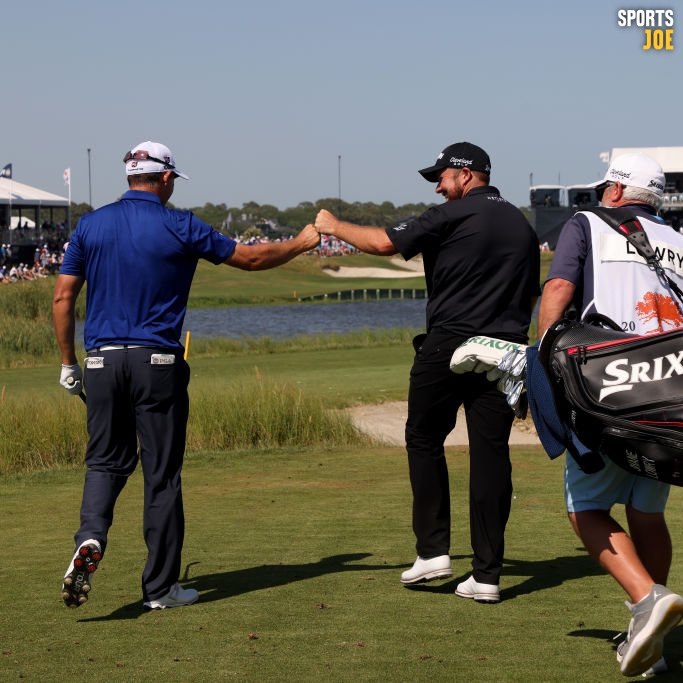 END_OF_DOCUMENT_TOKEN_TO_BE_REPLACED

With both men shooting low while others faltered, they ended up with Top 5 finishes that are massive shots in the arm for the rest of 2021.

"It's been a long time since I've been interviewed and been asked about my golf rather than The Ryder Cup," Harrington remarked. "So for today, at least, I'm back to being a golfer."

In terms of what their super Sunday finishes mean for Lowry and Harrington, in terms of points, rankings and money, let us take a close look.

While Lowry says he would not put it past Harrington being one hell of a captain's pick for The Ryder Cup, the captain of Team Europe demurred at such chat.

"I'm well past that time," said Harrington. "I'm too long in the tooth now at this stage, sweating through five rounds of golf and all that goes with it.

"I'm very much dedicated to being the captain. I'm letting other people have their time. I've had mine."


popular
World Cup 2022 Day 14: All the major action and talking points
From Ireland to Argentina: Alexis Mac Allister's Irish roots explained
Shay Given on how far Ireland could've gone at the 2002 World Cup with Roy Keane in the team
Ronaldo finally reveals why he got that hideous haircut
Positive update on Pele's condition as messages of good-will pour in
World Cup 2022 Day 13: All the major action and talking points
Patrice Evra 'likes' photo of Luis Suarez in tears after World Cup exit
You may also like
2 months ago
Cameron Smith refuses to answer disrespectful question about Rory McIlroy
2 months ago
Shane Lowry was nothing but gracious when asked about Queen Elizabeth II, after Wentworth triumph
2 months ago
"You've won enough!" - Shane Lowry and Rory McIlroy embrace after Wentworth nerve-shredder
2 months ago
Shane Lowry beats Rory McIlroy to PGA Championship after thrilling finish at Wentworth
3 months ago
Cameron Smith one of six golfers announced as latest LIV Golf stars
4 months ago
Rory McIlroy stuck playing it safe as Cameron Smith cuts loose to win The Open
Next Page