"WHAT?! Like, I knew she was very good, but this is crazy good!"

Team USA threw the kitchen sink at Leona Maguire in her rookie appearance at The Solheim Cup. The Cavan star responded with the greatest three days of her golfing career, so far.

Maguire has beaten the world No.1, the Olympic champion, a team that went into Sunday's fourballs on a winning streak and the American's own rookie sensation. No-one could best her.

END_OF_DOCUMENT_TOKEN_TO_BE_REPLACED

In claiming 4.5 points from her five matches, Maguire equalled a Solheim Cup record that has only been reached twice in the past 17 competitions. She also created a new Solheim Cup rookie record, and one that may never be broken. She was that good.

The 26-year-old had two years on Kupcho, a fellow Solheim Cup rookie, and both went into the match-up in form. The first hole was halved in par, but Maguire got away to an early lead with a pearler of an approach to the par-5 second.

END_OF_DOCUMENT_TOKEN_TO_BE_REPLACED

Maguire rolled in her eagle putt to give Europe a dash more blue on the board. She was cursing her putter on the next hole, though, as she had a good look at birdie but ended up bogeying. Kupcho was having putting issues too, so Maguire remained a nose in front.

Team Europe fans would have been hoping that three-putt was just a blip for the Cavan native. So it proved, on four, as Maguire took on a left-to-right break from 20 feet out to drain a class birdie.

Kupcho was trying her best to cling on and she halved the next hole when both she and her dialled-in opponent both carded pars. It was finger in the dam stuff, though. Maguire birdied the sixth and was 3-Up.

On the seventh, it was rinse and repeat from Maguire. Another medium-range putt, another birdie. 4-Up. It was a sensational start.

"WHAT?! Like, I knew she was very good, but this is crazy good!"

END_OF_DOCUMENT_TOKEN_TO_BE_REPLACED

The eighth hole was halved and it was on to the ninth. Kupcho was generally out-driving Maguire but the Irishwoman was using that to her advantage. Maguire was putting her approaches onto the heart of greens across the front nine, and putting Kupcho under pressure. On the ninth, she held her nerve with a testing two-putt but was still 4-Down at the turn.

Maguire - three birdies, an eagle, a bogey and four pars, to reach the turn at 4-Under - had been tough to live with. 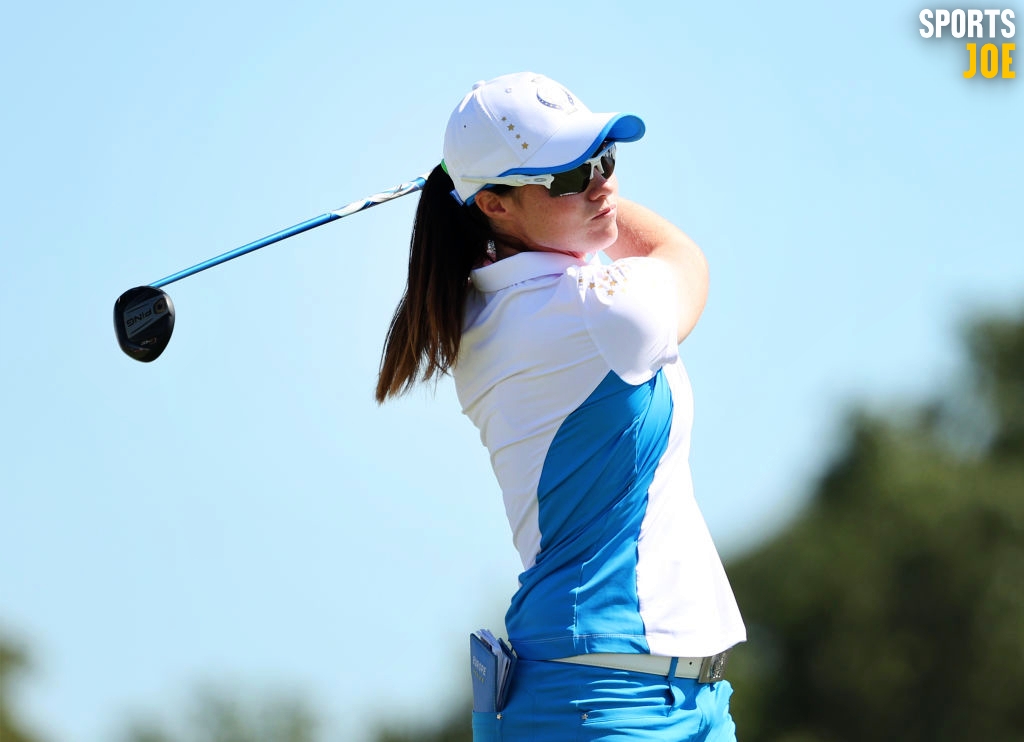 Leona Maguire of Team Europe plays her shot from the third tee at the Inverness Club. (Photo by Maddie Meyer/Getty Images)

Kupcho had a chance to get a hole back, on the 10th, but could not get her birdie putt to drop. As she stalked off the green, the putter flung at her bag of clubs summed up her frustration.

Both players cancelled each other out with birdies on the 11th and it was on to par-three 12th. Maguire was first up and she unfurled another glorious approach. The home fans were stunned into silence by Ballyconnell's finest. From eight feet out, though, her birdie putt missed to the left.

The par-five 13th was next up, and while both players had looks at birdie, the hole was halved in par. The holes were running out for Kupcho to turn the tide.

Sure enough, a Maguire par on the 14th saw Kupcho need a lengthy putt to keep the match going. She could not make it drop and Maguire had made history. Not bad for Ireland's first ever Solheim Cup representative.

IS THERE NO-ONE ELSE?!

Leona Maguire has taken everything Team USA has thrown at her and come out smelling of Cavan roses! 🙌 🔵 pic.twitter.com/1k34II4o5Y

"I knew I'd have to have my 'A' game today," Maguire said after her 5&4 victory.  "I'm just glad I had some energy left in my legs and was able to get it done."

Maguire's win was the first blue point on the board as Team Europe moved one step closer to retaining the trophy they won back in 2019.

In the end, it was Matilda Castren dropping this nerveless putt on 18 to retain the cup for Europe.


popular
World Cup 2022 Day 14: All the major action and talking points
From Ireland to Argentina: Alexis Mac Allister's Irish roots explained
Shay Given on how far Ireland could've gone at the 2002 World Cup with Roy Keane in the team
Positive update on Pele's condition as messages of good-will pour in
Jack Grealish says he regrets his comments about Miguel Almiron
Patrice Evra 'likes' photo of Luis Suarez in tears after World Cup exit
Ronaldo finally reveals why he got that hideous haircut