Leona Maguire is just five shots off the medal places after a terrific second round at Rio 2016.

The Cavan golfer rebounded from an underwhelming opening round, when she shot a three-over 74, to force herself into contention with a round two 65. 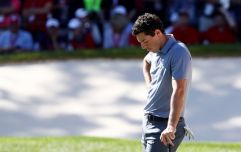 END_OF_DOCUMENT_TOKEN_TO_BE_REPLACED

Maguire came up with seven birdies on her second day on the Rio course to give herself every chance of claiming a medal at the weekend.

She dropped just one shot on her way to her 65 to finish Thursday just seven shots off the leader, South Korea's Inbee Park, who carded a five-under 66 for the second day running.

Fellow Team Ireland golfer Stephanie Meadow also looked to be gathering momentum as she closed out her second round, with consecutive birdies arriving on the 15th, 16th and 17th which saw the Royal Portrush golfer finish Thursday with a five-under 66.

On the latest episode of the GAA Hour Hurling Show Wooly and the lads reflect on a monumental weekend of action. Listen below or subscribe here on iTunes
Advertisement


popular
Galway fans' frosty reception for Davy Fitz doesn't make any sense
The most Stone Age tackle you've ever seen gets South African lock straight red card
'Brian was a genius... he would've killed you to even win a game of touch'
Ryan Manning hacked to the ground by Henri Lansbury in ruthless assault
"Johnno went, 'We’re not moving! You're trying to mess us about!'" - Ben Kay recalls red carpet controversy
"Some of the generals wanted me executed" - Irish rugby legend on flag caper that went wrong
Wallabies star bounces off Duane Vermeulen like a brick wall, gets yellow-carded
You may also like
2 years ago
Military coups, AK47s and gold medals - the remarkable story of how Ben Ryan guided Fiji to Olympic Sevens glory
3 years ago
Mick Conlan reveals Instagram message from man who robbed him of Olympic medal
3 years ago
Michael Conlan's embracing the lowest point of his career and making it his own
4 years ago
Ireland loses Olympic sailor Saskia Tidey to Team GB ahead of Tokyo 2020
4 years ago
It seems there was just one problem with O'Donovan brothers' appearance on Graham Norton
4 years ago
WATCH: O'Donovan brothers had a Hollywood actress entranced on The Graham Norton Show
Next Page