Graeme McDowell was close to tears when he ended his title drought on Sunday evening.

McDowell secured his first PGA Tour win since 2015 when he claimed a one-stroke victory in the US PGA Tour’s Puntacana Resort Championship.

A five-foot birdie on the 17th hole meant that McDowell didn't have to worry too much when he bogeyed on the last as the Portrush man held off the challenges of Chris Stroud and Mackenzie Hughes in the Dominican Republic. 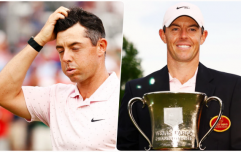 END_OF_DOCUMENT_TOKEN_TO_BE_REPLACED

Back in the winner's circle!

"(My caddie) Kenny (Comboy), who has been at my side for the last 13 years, it's been a grind for my whole family."

The victory sees McDowell move from 257th to 133rd in the world rankings and it also gives him the opportunity to earn a place in The Open Championship at Royal Portrush.

McDowell's 69 on Sunday saw him finish at 18-under-par 270 for his fourth victory on the PGA Tour, his first since his OHL Classic win at Mayakoba over three years ago.

"I’m really happy I got this done."


popular
Rob Kearney taught a classic GAA lesson when he tried to have the craic in second game back
Ex-Down boss Paddy Tally will be part of Jack O'Connor's staff if he's offered the Kerry job
Shane Lowry had no problem setting reporters straight at Ryder Cup briefing
Meath superstar named player of the month after sensational final performance
GAA could learn a thing or two from AFL's parade and self-promotion
The scenes in Newbridge as the biggest hit and hope ever knocks Moorefield out
The SportsJOE 12 o'clock quiz | No. 384
You may also like
1 year ago
Amateur golfers all over the world unite to emphatize with Rory McIlroy
1 year ago
Shane Lowry outshines Patrick Reed and Paul Casey with stunning round
1 year ago
"I'm going as hard as I can to get as strong and big as I can" - Bryson DeChambeau
1 year ago
McIlroy and Koepka confirm Nick Watney interactions after golfer tests positive for Covid-19
2 years ago
Rory McIlroy leaves Brooks Koepka in his dust to win $15m FedEx Cup
2 years ago
Shane Lowry is tearing it up in the USA again
Next Page