The Ryder Cup star tells Sports Illustrated 'he doesn't have a problem' when it comes to cocaine.

The normally sedate world of golf was rocked last July when it was announced that Dustin Johnson, then ranked in the world top 10, was taking taking a break to deal with 'some personal challenges'.

Soon Golf Magazine reported that Johnson had been banned for six months after testing positive for cocaine in a drug test. The PGA never confirmed that and always said that it was a voluntary break from the game by the golfer. 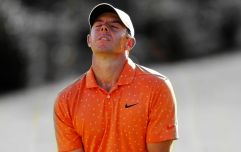 END_OF_DOCUMENT_TOKEN_TO_BE_REPLACED

Now, almost six months on, Johnson has spoken to Sports Illustrated about his decision to take time off. "I did not have a problem," Johnson said when asked about cocaine. "It's just something I'm not going to get into. I have issues. But that's not the issue."

Johnson didn't attend rehab but he did employ some people, such as a life coach, to help him manage the stress of professional golf.

"My way of getting rid of it was drinking or partying. Yeah, that might work for that day or the next week, but eventually everything keeps piling up."

Johnson admits to not drinking vodka - his drink of choice (Grey Goose, Soda and Lime to be precise) - for months now but again he said it wasn't a problem. "I don't miss waking up with a hangover, and I didn't drink very often. It was just when I did it was a little too much."

The interview also reveals that Johnson will return to action at Torrey Pines on February 5 or at Pebble Beach a week later.


popular
The most Stone Age tackle you've ever seen gets South African lock straight red card
Ryan Manning hacked to the ground by Henri Lansbury in ruthless assault
Galway fans' frosty reception for Davy Fitz doesn't make any sense
'Brian was a genius... he would've killed you to even win a game of touch'
"Johnno went, 'We’re not moving! You're trying to mess us about!'" - Ben Kay recalls red carpet controversy
"Some of the generals wanted me executed" - Irish rugby legend on flag caper that went wrong
Wallabies star bounces off Duane Vermeulen like a brick wall, gets yellow-carded
You may also like
1 year ago
Jon Rahm on what was going through his head before his epic putt
1 year ago
Rory McIlroy defends Dustin Johnson after Brooks Koepka comments
1 year ago
Brooks Koepka puts PGA Championship leaders on notice with final round comments
1 year ago
Mickleson winds up Faldo as Dustin Johnson grabs PGA lead
2 years ago
Team USA texts after Ryder Cup suggest all may not be what it seems
2 years ago
Two American golfers reportedly "had to be separated" following Ryder Cup defeat
Next Page