What the hell happened?

Jordan Spieth was sitting as pretty as pretty has ever sat on Sunday afternoon.

The world number two would have slept relatively soundly on Saturday night after taking a one shot lead into the final round.

That same final round was going swimmingly with a fifth hole bogey the only blemish on his front nine scorecard. Five birdies turned that into something of a non-issue.

Well, everyone else should stop playing at this point other than Spieth. He's running away with it.

Jordan Spieth has already won this tournament. He's so good it's not even fair. Maybe next year everyone else! (But probably not)

I love how the telecast is trying to make it seem like the Masters is anything but a foregone conclusion. No one is catching Jordan Spieth

Then it all went up shit creek.

Spieth bogeyed 10 and 11 before shit creek turned into shit rapids as he carded a seven on 12, throwing away the lead he had worked so tirelessly to put together.

Spieth is flat out rattled #TheMasters 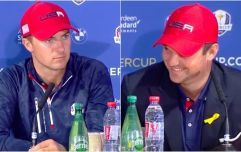 END_OF_DOCUMENT_TOKEN_TO_BE_REPLACED

And through all the #bottlejob jokes that flooded social media, a champion-elect calmly and determinedly went about his business as Sheffield's Danny Willet kept his composure to finish -5 and bite his nails while Spieth finished up.

But Spieth could only par the 16th, bogey the 17th and par the 18th which led to excited phonecalls from Willett to his wife to let her know that the biggest day in their lives was coming to a close.

Thankfully, there was much more focus on Willett's heroics than Spieth's capitulation at the end of an absolutely terrific and memorable Masters weekend.

Happy for Willett, I was speaking of Chubby James the MGR. Like him too & Lee & Paul & Ian & Chris...

Congratulations @Danny_Willett you were brilliant! Wish you hadn't told me you had no chance! 😱 👏🏻👏🏻👏🏻👍🏻 #TheMasters

Get in! @Danny_Willett Masters champion and to think I was going to go to bed. What a weekend for British sport!

Looks like it's all over bar the shouting for @Danny_Willett such great news for him, big shout out for his seconds/caddie JonathanSmart

Looking like pie and mash for the champions dinner next year! #Willett #TheMasters

Danny Willett didn't think about it. He just did it. A lesson in that.

Bloody tears in this household @Danny_Willett .. You little beauty .. #Masters

Can't argue with the swings @Danny_Willett has just put on those last few holes. #clutch


popular
"I remember someone saying, 'This guy's the best of the lot of them. Just wait for him'" - Brian O'Driscoll
"I trained with a guy that was born in 2004 the other day. We reckoned Earlsie could be his father!" - Peter O'Mahony
Nigel Owens on most annoying players to referee (three of them are Irish)
Six All Blacks but no Ireland players in world's top 20 list headed by Antoine Dupont
The story of the GAA's greatest ever minor
"I asked one question and lads slagged the arse off me!" - Johnny Sexton on Roy Keane chat
Cork GAA will have fight on its hands to hang onto top prospect
You may also like
3 years ago
Patrick Reed's wife sensationally suggests Jordan Spieth 'did not want to play' with him
3 years ago
Jordan Spieth unabashedly owns his late decision to wind up Ian Poulter
3 years ago
Jordan Spieth makes unmistakable dig at Ian Poulter as USA fight back
3 years ago
Jordan Spieth facing possible suspension from PGA Tour
3 years ago
The Masters: The difference between McIlroy and Spieth on Sunday summed up with one important detail
3 years ago
Patrick Reed holds his nerve to win The Masters after sensational showdown with Spieth and Fowler
Next Page