"I've believed in myself since day one."

There has been a significant Collin Morikawa rankings bump after the 23-year-old won his first ever Major at the 2020 US PGA Championship.

At just 23, day one for Collin Morikawa was February 6th 1997. Just over two months after Morikawa was born, in California, Tiger Woods won his first Major at the Masters at the age of 21.

END_OF_DOCUMENT_TOKEN_TO_BE_REPLACED

For Woods, that win at Augusta was the beginning of an incredible run at success in Majors golf. Within 11 years, Woods had won 14 Majors and put himself right up there with the likes of Jones, Hagen, Palmer and Nicklaus.

For Morikawa, talk of legacies and records to aim form can wait. On Sunday evening at Harding Park, in San Francisco, he was having trouble enough literally holding onto his first Major trophy. 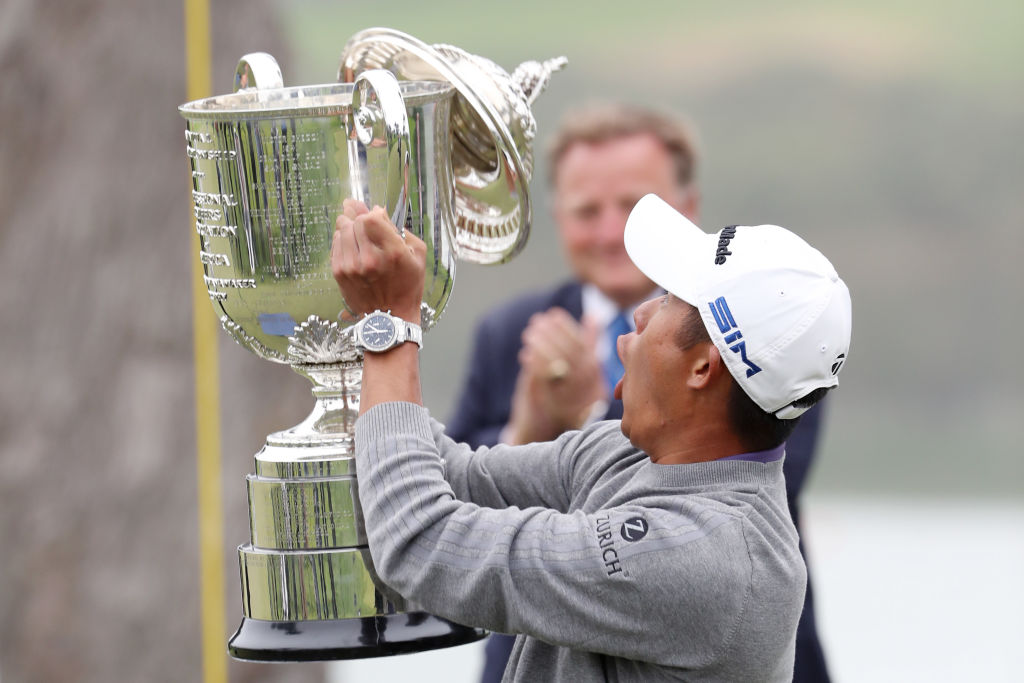 Collin Morikawa reacts as the lid to the Wanamaker Trophy falls off during the trophy presentation at the 2020 PGA Championship. (Photo by Jamie Squire/Getty Images)

In winning the Wanamaker Trophy, with a brilliant couple of closing rounds (65 and 64), Morikawa joined some elite company. Woods, Jack Nicklaus and Rory McIlroy were all 23 when they became US PGA champ for the first time. Morikawa commented:

"It's great company. You know, it's been crazy, because this entire start of my professional career, I see all the things comparing to Tiger and doing all this and then Tiger is on a completely different level. I think we all know that. But any time you're in the conversation of the greats, Jack, Rory, Tiger, no matter who it is, if you're in that conversation, you're doing something well."

END_OF_DOCUMENT_TOKEN_TO_BE_REPLACED

Speaking of good company, that Major win has jumped Morikawa seven places to No.5 in the world in the new rankings, which were confirmed this morning. It is a career high for the University of California graduate, who has now won more PGA events [3] than he has missed cuts [1] in his 28-tournament pro career.

This is it. This is the shot!

END_OF_DOCUMENT_TOKEN_TO_BE_REPLACED

We have a new World No.1, again. Jon Rahm, who briefly held top spot in July, is back atop the rankings after finished tied 13th. He replaces Justin Thomas, who struggled at Harding Park and drops back to No.2 with McIlroy a place further back.

Dustin Johnson finished runner up in a Major for a fourth time and a small consolation is that he climbs to 4th in the world off the back of that. 2019 champion Brooks Koepka drops back to No.7 in the world.

Shane Lowry drops back to 28th in the world, down two places, after finishing in a tie for 66th. The 2019 Open champion finished in the PGA's Top 10, last year, so loses out on some world ranking points. He is looking forward to playing the Wyndham Championship next, where he can utilise his fade off the tee a little more.

"I mean, what do you take from this week?" Lowry mused after he finished on +3 for the tournament. "Who knows? I played okay this week. I played okay in parts. Made a lot of birdies. I struggled a little off the tee, which is going to put you in trouble around here."

"I still had a chance of it. I was grinding my nuts off the last few holes, and I got absolutely screwed with a lie in the bunker on 16 and 18 and lipped out for birdie on 17, and it was one of those days where if I could have birdied two of the last three, which are doable on this course, it would have been a half-decent day, but I played them badly and got a bit unfortunate.

"Look, it's been 13 months since the Open. You don't really think about stuff like that when you're out there playing grinding away in tournaments like this like I've got a lot to play for over the next while. I'm just disappointed with my day today because I felt like if I could go out and shoot 5 or 6 under I could have a really good week."

Elsewhere in the rankings, Paul Casey climbs from 28th to No.19 in the world after his tie for second place. Jason Day's return to form [tied 4th] sees him vault from 42nd to No.32 in the world. Matthew Wolff [36th] and Scottie Scheffler [46th] climb 17 and 13 places respectively after they tied 4th with Day, Tony Finau and Bryson DeChambeau.


popular
“Players flourished when Roy Keane left” - Rio Ferdinand on why Keane was a 'detriment' to Man United
Man United considering loan move for Christian Pulisic
"To be able to call myself the fastest man in Irish history is just amazing" - Olatunde overjoyed after record-breaking run
The FootballJOE Pub Quiz: Week 50
Specsavers troll former Liverpool star for Darwin Nunez headbutt claim
Wexford, Waterford and Kilkenny down some good men as Australia calls
The moment Israel Olatunde realised he qualified for the Euro 100m final is what it's all about
You may also like
1 month ago
Viktor Hovland made a lovely gesture to Rory McIlroy after his sublime eagle
1 month ago
Tiger Woods on Rory McIlroy's gesture on 18 that caused the damn to break
1 month ago
Rory McIlroy gets Open crowds roaring with ballsy shot on 'Road Hole'
1 month ago
"He shouted fore" - Rory McIlroy accidentally breaks fan's hand with tee shot at Open Championship
1 month ago
Rory McIlroy rides adrenaline from first hole "bonus" to go low at The Open
1 month ago
Tiger Woods goes to town on LIV Golf defectors at Open press conference
Next Page