All levels of pretence have been flung out the window.

Bryson Dechambeau and Brooks Koepka do not like each other.

Sure, they can be civil. They can say nice things about each other's games in press conferences. They can be in the same Ryder Cup team. They can even pose for corporate, gimmicky shots when they are shunted into the same room together. 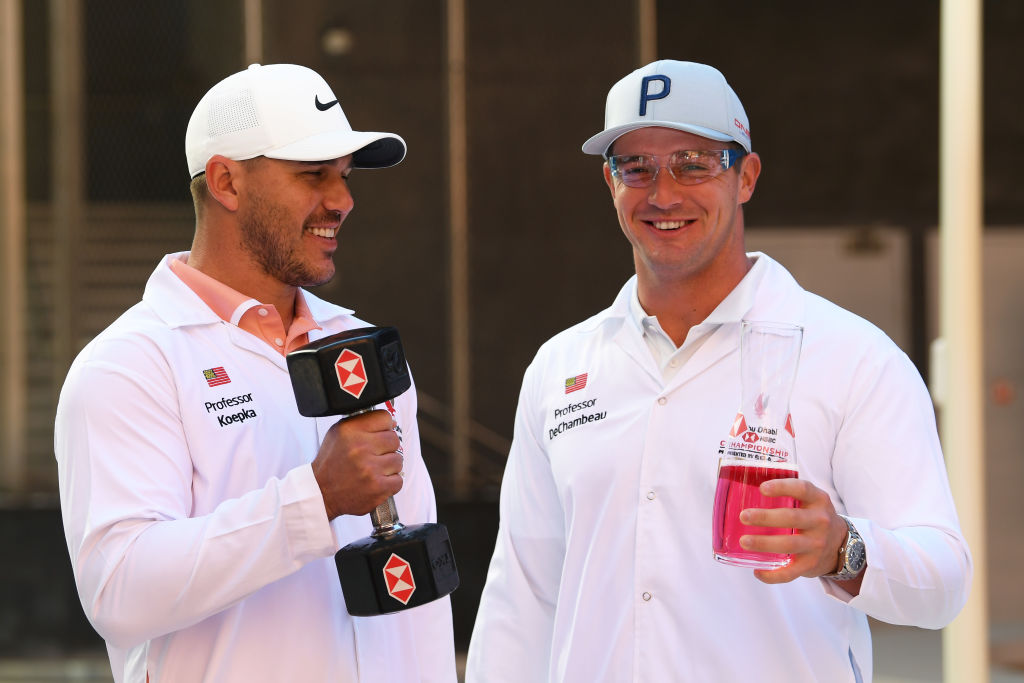 END_OF_DOCUMENT_TOKEN_TO_BE_REPLACED

But the pair have had a fractious relationship for years. They do not enjoy too much time in each other's orbits.

That is perfectly fine, but when they allow their dislike for each other to spill into the open, that is when people sit up and take notice.

Following the PGA Championship at Kiawah Island, at the weekend, a video emerged of Koepka getting so distracted by his fellow American walking through the background of his interview.

The video was in wide circulation until NBC Golf tracked it down and got rid of it from social media. The damage had been done, however, and most of us were getting a serious kick out of it.

END_OF_DOCUMENT_TOKEN_TO_BE_REPLACED

When it was announced that Phil Mickelson and Green Bay Packers star Aaron Rodgers would be taking on DeChambeau and Super Bowl kingpin Tom Brady in 'The Match', on July 6, it got spicy.

Brady (or the canny person running his social media account) tweeted this meme:

That was not the only one that was doing the rounds.

Koepka even got involved, and let Rodgers know who he would be rooting for:

Although he remained silent when the footage emerged, Dechambeau logged onto Twitter and threw out a response that even Koepka himself could not deny:

@BKoepka It’s nice to be living rent free in your head!

Dechambeau, you must say, is playing this one nicely.

It then fell to Phil Micelson, who won the PGA Championship, to diffuse the tension with some 'Lefty' humour:

I feel like I’m in the middle of something and should step aside. (Except they want the CURRENT PGA champ:)

One can only hope the organisers of the next big-money PGA event pairs these lads together for a round or two.

It would be box-office viewing.


popular
Rob Kearney on defying union "bigwig" that told him he'd never play GAA again
Kieran McGeary on his relationship with Mickey Harte and his role in Tyrone's success this year
When Liam Brady lit into Brian Clough for his dismissive Mick McCarthy comments
How one text message a teammate sent Kieran McGeary proves that Tyrone's success was a team effort
The scenes in Newbridge as the biggest hit and hope ever knocks Moorefield out
"I just knew that Karen was going to be there with us... I absolutely adored her" - Maeve Kelly
"Mayo have been back and back and back all the time. That's some resilience, to do that." - McGeary bats for Mayo
You may also like
2 weeks ago
Leona Maguire creates Solheim Cup history after blitzing Team USA
2 weeks ago
"A star is born!" - Americans gush as Leona Maguire beats their best
2 weeks ago
"It's such an honour to play with her" - English star blown away by Leona Maguire
3 weeks ago
Cantlay gives his take on being scolded by Bryson DeChambeau at BMW epic
2 months ago
Rory McIlroy's reaction to 14th tee shot slip captured his Open troubles
3 months ago
A knife wouldn't cut the tension as Bryson's comment drives Koepka mad
Next Page