The reigning champ fancies his chances.

Dustin Johnson leads the US PGA Championship heading into the final round, but Brooks Koepka is not far off and pace and is talking himself up. Rory McIlroy is out of the running, but still generating plenty of comments and opinions [he is in the firing line again].

Koepka is the reigning US PGA champion having won the Wannamaker trophy in 2018 and again in 2019. He carded a -1 round of 69, on Saturday, to lie on -7 heading into the final round, two back from overnight leader Dustin Johnson.

END_OF_DOCUMENT_TOKEN_TO_BE_REPLACED

Johnson had a fine day of it, at TPC Harding Park, and carded a -5 round of 65 that still managed to include a double bogey. The 36-year-old has 24 career wins and was world number one for 64 consecutive weeks, starting in February 2017, but only has a sole Major [2016 US Open] to his name.

A glance at the leaderboard shows Koepka as the only multiple Major winner in the Top 12. Jason Day and Justin Rose (both -6) have won once while the other eight golfers - including Tony Finau, Tommy Fleetwood and Bryson DeChambeau - have yet to clinch a Major.

It was no surprise, then, to see Koepka putting the rest of the field on notice about his title credentials, including his friend Johnson. Asked if getting that second Major was harder than the first, Koepka remarked, "Well, if you look at the top of the leaderboard, I'd say yes." The four-time Major winner expanded on the point:

"I think expectations [make it difficult]. I guess it does become difficult if you think you've played good enough to win multiple ones. But you've just got to keep putting yourself there. I'm doing a good job of that. But the second one definitely is a little bit tougher, I think, as you can see from the top of the leaderboard."

END_OF_DOCUMENT_TOKEN_TO_BE_REPLACED

And, if that was not on the nose enough for the likes of Day, Rose and Johnson, the reigning champion returned to the point later in his post-round interview. In 2019, it was Johnson chasing Koepka with the US PGA title at stake, but to little avail. Brooks Koepka commented: 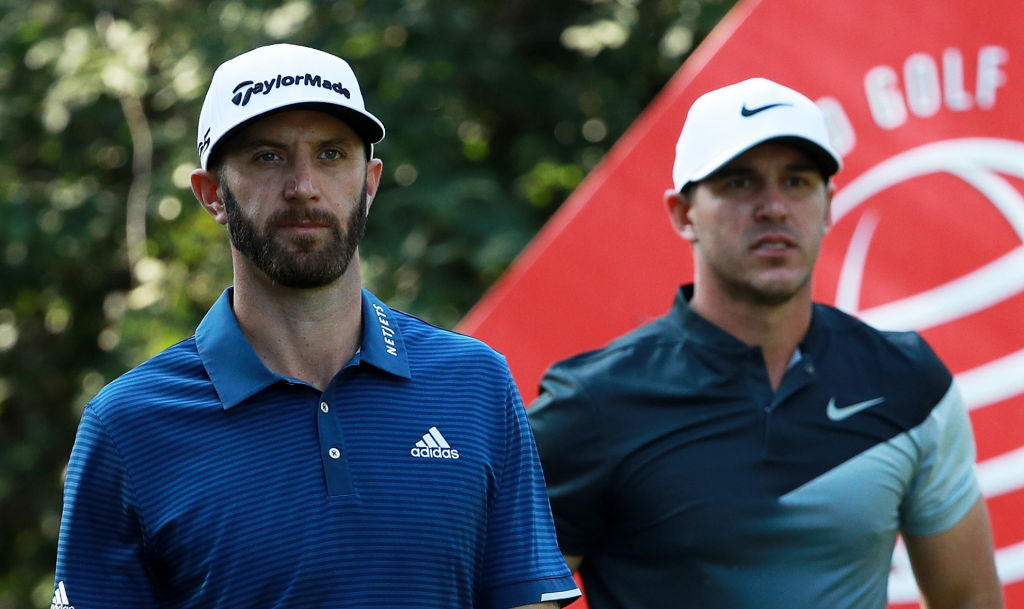 Johnson has racked up a rare runner-up slam in all four majors and has been in the mix on the final day on numerous occasions now. Asked what is different now from the other times he has been up with the leading pack in Majors, he commented:

"Well, those, I was definitely younger. I have been out here awhile now. I've been in contention a lot, and I've got it done a lot of times. Tomorrow, it's no different. I need to be out... I'm going to have to play good golf if I want to win. It's simple; I've got to hit a lot of fairways and a lot of greens. If I can do that tomorrow, I'm going to have a good chance coming down the stretch on the back nine."

END_OF_DOCUMENT_TOKEN_TO_BE_REPLACED

Rory McIlroy, meanwhile, will begin his final round some nine shots back from Johnson after failing to fire on Saturday. McIlroy's third round card was eventual, to say the least. He got as low as -3 but four bogeys over the closing stretch saw him card a 71 to finish on Evens.

McIlroy has not won a Major since 2014 and his ongoing drought drew some scathing comments on the popular golf podcast 'No Laying Up'. Phil 'Randy' Landes says the Northern Irishman has been the "overall disappointment" of the championship.

"He absolutely stinks! He hasn't won a Major in six years, guys. Like, at some point, you've just got to call is as it is."

Todd 'Tron' Schuster says he is not willing to give up on McIlroy yet but remarked, "I'm so tired of watching him hitting shitty wedges from 120 yards."

McIlroy will have two more bites at the Major cherry before the year is out, with the US Open and Masters coming up in September and October.


popular
Ireland vs Wales: All the big talking points, moments and player ratings
Peter O'Mahony reaction to Liam Williams scuffle shows he may finally be mellowing
Patrick Horgan addresses infamous Kieran Kingston interview after Cork beat Limerick
Matt Williams tears into media for "rubbish" written about Ross Byrne
Jamie Carragher tweets savage analysis of Joe Gomez and Joel Matip
"You know why" - Jurgen Klopp refuses to speak to Athletic journalist at press conference
Conor McGregor offers solution to Croke Park fiasco that should suit all parties
You may also like
1 month ago
GAA officially the most popular sport in Ireland again
3 months ago
Ian Poulter fires back after Rory McIlroy comments on Ryder Cup "betrayal"
3 months ago
Shane Lowry on his Tuesday duels with Rory McIlroy at The Bear's Club
4 months ago
Shane Lowry holds hands up over Saudi Arabia comments as he admits 'golf could be in trouble'
4 months ago
Cameron Smith refuses to answer disrespectful question about Rory McIlroy
4 months ago
Shane Lowry was nothing but gracious when asked about Queen Elizabeth II, after Wentworth triumph
Next Page