You know what they say. Keep your friends close but the team statistician closer.

Alan Brogan was never known for his tackling. He didn't pride himself on the hard-hits. Was more of a finisher than a road-block.

But with his career winding down the game was beginning to change and fast. 2011 was the year and Kerry were the opposition. A team that had Dublin's number for so long, something needed to change for Dublin to get their breakthrough.

Work-rate was singled out. Forwards were exceptions to the rule no longer. Defence started with your corner forward. And so Brogan and co. up front began, under the orders of the expecting Pat Gilroy, to work harder and up their tackle count.

Indeed, it all paid off on that September Sunday when Brogan's interception amongst the many led to Kevin McMenamin show-stopping gal. On The GAA Hour Live show at Liberty Hall, Brogan jokingly told a story about how he maintained his tackle count during the year. 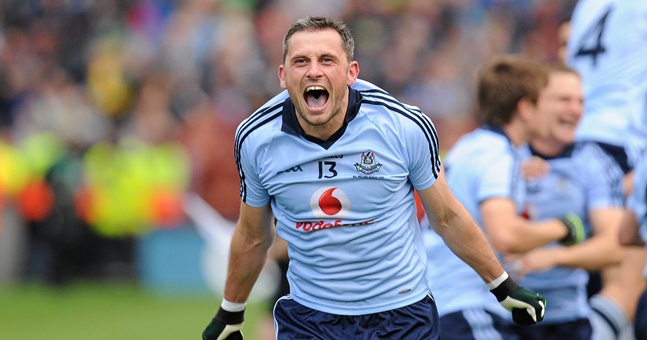 "We used to have a statistician Ray Boyne and I had to ring him on the Monday morning after a match. 'Ray will you stick me down for a few tackles there.' It'd be like Alan Brogan 'one tackle, Bernard Brogan, zero tackles.' Give us a couple of tackles will you."

Ger Brennan was also on the Dublin team at the time and he recalled how that rising work-rate helped change the face of Dublin football.

"We had a statistician Ray Boyne and I used to ring him on a Monday morning to say, 'Ray will you stick me down for a tackle or two'?"@alanbrogan13 had the loopholes to get around Pat Gilroy's culture change 😂

END_OF_DOCUMENT_TOKEN_TO_BE_REPLACED

"But certainly, the one thing I knew going into that match and Alan I'm sure will agree with me here was that, whether we were going to win or lose on the scoreboard, it had been a massive success because lads were beginning to play for each other and I know you might have one or two clips of the game, but Alan was actually the guy who got the interception, who got a hand to I think Declan O'Sullivan's handpass in the middle of the field which I think led to Kevin McMenamin's goal. Like, Alan never tackled for years, but he got Player of the Year that year!"

Another trick of the trade Dublin used in Brogan's time was to applaud Hill 16 before games. Ger Brennan couldn't understand it, but Brogan explained that it was a bid to eke out a psychological edge on their home patch.

"We were coming up against the Tyrones, the Kerrys and we were getting bet off the park so we were looking for any angle. Any angle we could find to bring us that bit closer. It wasn't even intimidation or anything it was just to get that Hill 16, the 16th man behind us and see could that make a difference for us. There was no, nothing really more to it than that to be honest with you.

You can listen to The GAA Hour live from Liberty hall here with a Youtube link to follow.


popular
Carragher pushes all the right buttons and Keane delivers in gold
Jermaine Jenas' reaction to Eamon Dunphy punditry is absolutely hilarious
Ireland name team to play England
Conor McGregor's next fight narrowed down to two options
"At the end of it, you're just saying, 'thank God I didn't block that ball down'"
Rovers to continue Direct Provision initiative for 2020 season
The Tony Kelly show in the storm as forgotten man Shanagher shows his worth
You may also like
5 days ago
The GAA Hour | Football | Jonny Cooper interview and David Gough clarifies
5 days ago
"You're still trying to get your one-rep max higher, and your fitness higher"
3 weeks ago
Tipperary make statement of intent with battling draw against Dublin
3 weeks ago
"I was thinking, 'Oh my God, how am I supposed to play beside them?'"
3 weeks ago
Two giants rise above the fray
3 weeks ago
Kerry vs. Dublin ends in meleé, and a draw
Next Page