We've found one of GAA's most beautiful jerseys in Scotland

While championship summer clicks into gear over in Ireland, Glasgow will this weekend play host to a whopper of a game.

Scotland GAA will face the footballers of Kilkenny at Peterson Park on Saturday and we honestly can't call it. 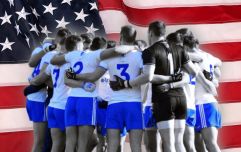 America produces the goods again with another gorgeous GAA jersey

END_OF_DOCUMENT_TOKEN_TO_BE_REPLACED

No Sam Maguires here. This is the Inter-bloody-County Championship we're talking about here!

Earlier this month, Scotland GAA signed a three-year deal with kit manufacturers O'Neills that included a re-design of the team gear and crest [now featuring a thistle and 'CLG na hAlban].

There is also the addition of some tartan accents that make this a kit we need to have in our lives.

As absolutely sweet as the kit is, it is not enough to knock the Masita/Kansas City GAA champion from top spot.

Still, fair play to all involved in putting this beauty together.

Good luck to the Scots against those mighty Cats.