UK to allow 4,000 fans in stadiums when lockdown lifts, Ireland not expected to follow

A maximum of 4,000 fans will be allowed to attend outdoor sporting events in the UK after lockdown restrictions are lifted on December 2nd, the BBC are reporting.

Fan entry will only be allowed in low risk areas, and will be limited to 4,000 capacity regardless of stadium size.

During the most recent international break, Northern Ireland hosted 1,000 supporters in Windsor Park for their home playoff clash with Slovakia in Belfast.

The UK prime minister Boris Johnson is due to address the nation on Monday evening in an attempt (always stress 'attempt') to clarify the new rules to be implemented after their period of lockdown.

It is also expected that Johnson will announce a new, strict tier system with a five day period over Christmas when families are allowed to form bigger bubbles.

Ireland's lockdown is set to end a day earlier on December 1 but it is unlikely that any spectators will be allowed to attend sporting events. 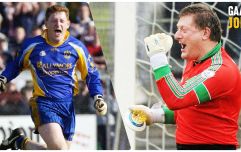 "It’s an easier life in goal, you’re not waiting for some fella to give you a box in the jaw"

END_OF_DOCUMENT_TOKEN_TO_BE_REPLACED

The All-Ireland men's football semi-finals take place on the weekend of December 5 with the remaining ladies football semi-final being played that Sunday. The following weekend, the hurling and camogie deciders are set but, unless Ireland moves from Level 5 down to Level 2 or 1, there is no allowance for fans in stadiums.

Under Level 1, 500 people are allowed to attend outdoor sporting events in a stadium with at least 5,000 capacity. Under Level 2, 200 people can attend.

Just like the provincial finals, the rest of the GAA calendar could very well be played out behind closed doors.