Tyrone fans planning ambush of their own on Hill 16

The game is afoot.

Sunday will see Tyrone make their first All-Ireland football final appearance in 10 years and they could not have asked for a tougher team to welcome back to the big stage at Croke Park.

Dublin are going for four-in-a-row against Mickey Harte's men. You would be hard pressed to find someone from outside of Tyrone to back them for an upset victory.

END_OF_DOCUMENT_TOKEN_TO_BE_REPLACED

The game will be a sell-out, which should please the GAA after swathes of empty seats in the semi-finals. With both counties only allocated 12,000 seats apiece, it should lead to Hill 16 being populated by a fair number of fans from both counties.

Back in 2013, Mayo fans swarmed into the terraced end of Croke Park for a final clash with The Dubs. The men from the west would be edged out 2-12 to 1-14 but one of the stand-out memories from that day was the sheer number of Mayo fans that made their presence felt on Hill 16. 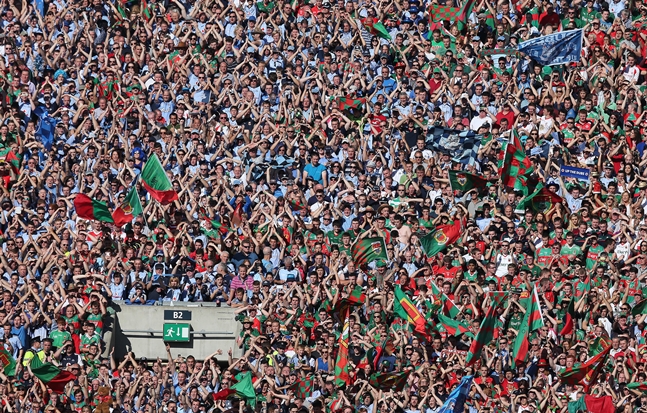 Three years on, sparked by this Diarmuid Connolly tweet, Mayo fans plotted to get as many bodies onto Hill 16 as possible.

Ahead of the final, on Facebook, Mayo Club '51 posted:

'Now is the time, Mayo fans. We need to put in a Trojan effort to get as many tickets into Mayo hands as possible. And we need to do what we managed in 2013 and get as many Mayo fans onto the Hill as we can!!!

Diarmuid might have forgotten that Croke Park is not Dublin's home ground (and it'd be hard to blame him seeing as the GAA have practically handed it to them) but Croke Park is everyone's!! On the 18th we need to up the noise levels like never before and claim it as OURS!!'

Directly behind the goal, Dubs were out in light-blue force for that game, in September 2016, but Colm Parkinson got a great snap that showed how many green and red jerseys, and flags, were proudly on display.

Mayo taking over half of hill 16 pic.twitter.com/h1g2xV6W4H

Dublin drew with Mayo that day too but won the replay and, last year, beat them again for their 27th All-Ireland triumph.

Tyrone are up next at Croker and 'Tyrone Life' are getting behind the planned ambush by 'Tyrone Hill'. Their Facebook post reads:

'Tyrone to take on the Dubs on and off the Field! Red and White invasion on Hill 16!!! WE BELIEVE!!!

'We have been told that large groups of Tyrone GAA Fans are set for a party on Hill 16 come Sunday and we are certainly looking forward to the colour and noise that will bring to what is set to be an amazing occasion...

'Tyrone Hill have set up a page on the prospect of a Red Hand party on Hill 16 and we are eager to know just how many are set to brave the Dubs' home on all Ireland Final Day.'

Tyrone will need all the help they can get if they are to dethrone the Dubs.

Their players would definitely get a lift if they looked up at Hill 16 during the pre-match parade and saw it bathed in red and white.


popular
Matt Williams wants two changes and Peter O'Mahony benched for Ireland vs. France
"Remember that name" - Sonny Bill Williams raves about Ireland U20 star after outrageous try assist
Peter O'Mahony reaction to Liam Williams scuffle shows he may finally be mellowing
Ireland vs Wales: All the big talking points, moments and player ratings
Two changes as familiar faces return to our Ireland team to face France
The two reasons why Aidan O'Shea's performance against Armagh was his best in ages
Allianz National League Round 2: All the action and talking points
You may also like
2 weeks ago
QUIZ: How many of the 33 county SFC champions for 2022 can you name?
3 weeks ago
"You need to be able to hurl your way out of trouble" - Composure the key to Dunphy's game
1 month ago
"We'll have plenty of Christmases" - McGowan and club players should be envied not pitied
1 month ago
'With the worlds’ greatest thief not able to take even just one friendship away' - Cooper retires with heartfelt statement
1 month ago
Mickey Moran gives a rare interview in TG4's brilliant Anton O'Toole documentary
1 month ago
How many of the 65 county senior champions for 2022 can you name?
Next Page