It took a few seconds for the Kilkenny fans in Nowlan Park to realise that the final whistle actually meant the end of that game.

With Darren Brennan's last puck high in the sky, the Galway players jumped around the pitch delirious. Maroon fans clenched fists. A big collective sigh of relief filled the air. The visitors could hardly believe it. But they didn't care.

Never ever a beaten docket, the saying that you have to be at least five points better than Cody's team to actually beat them rang truer than ever on Sunday. The funny thing is that Kilkenny people know it better than anyone else.

Beating them once, Brian Concannon's goal, won't do. Beating them twice Johnny Glynn's point, three times, Johnny Coen's goal - none of it will do. You have to do it again and then you have to keep doing it until the 74th minute is behind you. 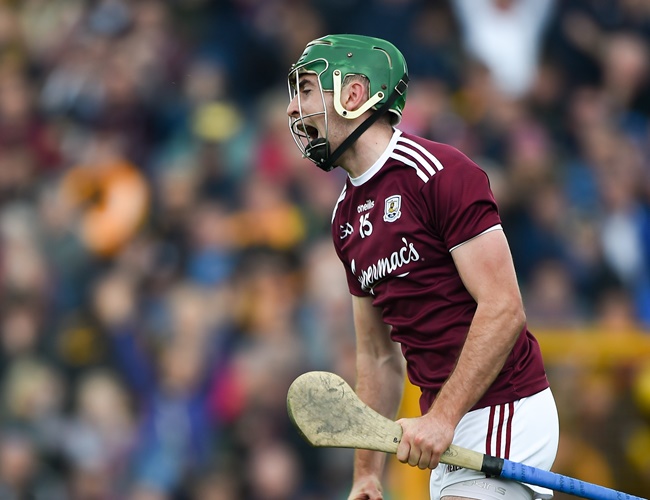 There's something inevitable about TJ Reid just tacking one on. And then another one. And then someone like Richie Leahy chipping in as well. They're probably going to level it up now.

That brings us to Darren Brennan's last puck and Colm Lyons' decision to call a halt to it all with the ball in mid-air. 74 minutes were on the clock alright but between the referee fussily pushing TJ Reid back for his last free and between that free actually been taken, only about two minutes of added time were actually played.

And then just to add to the confusion, one of the clocks in Nowlan Park was 30 seconds ahead of the other.

Bottom line - Galway should have had to win that last puck-out to win the game. Kilkenny should have been given the chance. Eventually after it hit home that it was over and that they'd lost, they roared and they fumed.

Hard to blame them.

Speaking to the assembled media after the game, Brian Cody bit his tongue as he delivered his verdict. His face told us everything we needed to know.

“The fact that ye’re saying it tells the whole story,” he said of the added-time situation with a shake of the head.

“I wasn’t following it as closely as that so I think you’ve answered your own question.”

It's essential to read between the lines.

“I’m not going to comment on referees. It’s ridiculous that every question so far has been almost about the referee so you better go down and ask himself..."

Ridiculous. Afterwards Cody was fulsome in his praise of his gallant team.

"We were playing a very, very good team. We played a fair bit of the game with 14 men. I thought the players fought to the bitter end so great credit to the players," he added.

"It's a great thing to be looking forward to. All our players are used to championship hurling..."

There will be another kick in the Cats in Wexford Park.