"The GAA does not take a position"

The GAA has issued a statement to remind the public that it is a non-party organisation.

With the referendum to repeal the Eighth Amendment set for Friday 25 May, a group called GAA Athletes for a NO Vote appeared at Ballyfermot Sports and Fitness Centre to talk to the press and read an official statement on the matter that is naturally bringing the country to a standstill, if not a standoff.

Mickey Harte and four other high-profile GAA figures, including Meath legend Joe Sheridan, gave a skills lesson to local children before campaigning on the referendum.

Speaking to the Irish Times at the event at the event, Harte gave his reasons for his stance on a NO vote.

"It’s a question of stating what you believe and to me it’s a straight vote between a culture of death and a culture of life.

"It is dehumanising what is happening." 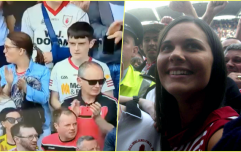 END_OF_DOCUMENT_TOKEN_TO_BE_REPLACED

The event led to criticism of the personalities for bringing the GAA into the debate and the GAA club in Ballyfermot also issued a statement of their own to distance themselves from the matter.

On Monday afternoon, the GAA moved to officially clarify that whatever political stances individuals take, they are not reflective of the GAA.

In a brief statement, the organisation accepted that its members could have their own views but the GAA cannot and will not.

'The GAA is a non-party organisation whose individual members may, of course, decide to take positions on political issues in accordance with their own personal views and commitments. As an Association, however, the GAA does not take a position, or comment in any way, on either elections or referenda.'


popular
Shane Lowry on his Tuesday duels with Rory McIlroy at The Bear's Club
QUIZ: Can you name the sponsors of all 32 of these old county jerseys?
Roy Keane linked with Championship job to replace ex-teammate
Predicting the 31 biggest knock-out championship games around Ireland this weekend
Two Man United players led a furious half-time inquest into Manchester derby performance
"This is the darkest day for English rugby... the ship has sunk" - End of the road for Worcester Warriors
"I think Wexford football is in trouble if something is not changed" - Banville criticises Wexford lay-out
You may also like
4 months ago
Mickey Harte says 'it's nearly too late to market Tailteann Cup well now'
4 months ago
Former Tyrone coach believes that Red Hands will thrive with their 'backs against the wall'
5 months ago
'The times they are a-changing' - Why this Derry side are a new but familiar threat to Tyrone
5 months ago
"I didn't know a lot about him until recently" - Mickey Harte impressed by Paddy Lynch as Cavan dismantle Antrim
5 months ago
Ronan O'Neill opens up on Tyrone exodus, Darren McCurry's comments and Mickey Harte
6 months ago
Darren McCurry - "If Mickey Harte had have been there the following year, I would have left"
Next Page