There's far more left in this man too.

For 57 minutes on Sunday, Kieran Donaghy bounced around Croke Park like he was a teenager.

In and out he went from full forward, into midfield, back further if he had to and, all the while, he had a pep in his step. He was roaring in boys' faces, he was hitting shoulders, evading clutches and darting into space at every half chance.

He set up Donnchadh Walsh at one stage in the first half, for a decent enough score, but it felt like Star was screaming out passionately at his number 12 for a good 11 seconds afterwards. That's the way. That how to do it. That's what we do.

You see, he's not just a big man with some of the best aerial abilities the game has seen. He's savage hungry. He's wired when he steps across a white line and he brings chaos to every battle he forces himself into.

But even in all that madness, Donaghy - fresh back into the team or not - is one of the real constants for Kerry.

Despite brushing Galway's quarter-final challenge aside at headquarters, the Kingdom offered an unconvincing enough display as their ruthless rout over Cork and the first 16 shots all going over was drastically overshadowed in the capital with an attacking performance that was as random as it was inefficient.

Chances came and went, Kerry lost sight of the radar but, in all the uncertainty, it was Kieran Donaghy they could rely on.

The Stacks man hugged the edge of the square but he was almost like the first wave of attack from that front three - the first to be unleashed. He came charging out time and again, straight and purposeful and, more often than not, he was used. If the pop off wasn't on, he'd spin and, suddenly, he's the man looking to make the most out of Geaney and O'Donoghue. 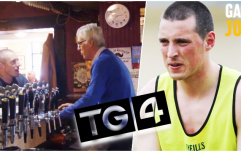 END_OF_DOCUMENT_TOKEN_TO_BE_REPLACED

It was a real bashful shift from him though. At one stage, he just flicked Michael Daly out of his way as he carried the ball straight through the middle. He held it out at midfield when he had and, yes, he was deadly under the high ball.

It's not like that was Kerry's plan though - just an add on and, Christ, when they floated one up, Galway had no chance. Poor David Walsh might as well not have been there when Donaghy went up to fetch one of those pumped in efforts as he stripped it from the sky and laid on team mates or, even better, brushed maroon jerseys out of his way and curled in with his foot.

He plodded around not like a man who's doing it for one last night, but as a beautiful extra to this Kerry attack who could do the same thing for a few years to come.

And it makes sense when you hear how Eamonn Fitzmaurice welcomed the former Kerry captain back into the panel - as late as April.

In an interview with PST Sport, Donaghy spoke of how the manager got him back on board.

"He said I looked fit and we talked about where my hunger was at. I felt it was still there. He said to get to the gym with the Kerry boys 2 nights a week and said to keep up the basketball at weekends."

For most, it's all in or piss off.

To treat everyone equally, treat them differently. Kieran Donaghy has paid his dues to Kerry and Fitzmaurice and kept sharp, so he could be brought in just in time to be brought into the squad for the league final against Dublin.

"Eamonn called me and said to come in for a gallop and see how I felt. I hadn’t touched a ball in months. The first night back training with the group I was like a young minor all over again, the excitement, the tension, the question marks.

"Was I still up to this level or will I get shown up? I didn’t eat a bite with the nerves all day. Maybe I should do it more often as I flew it, caught every ball, kicked points and set up a goal. I got the nod as the last man on the panel."