It's going to be one hell of a summer of football in the states.

Boston, Chicago, San Fran and even Philadelphia. Big names have left Ireland behind them and they've headed to the land of the free. Football, a summer holiday and plenty of sun. What more do you want?

With the July 1 transfer deadline passed, all the papers have been signed and the American GAA championships are about to take off.

Whatever way you made it, there are some quality Irish Gaelic footballers out in America this summer and once they join up with the home based players we're guaranteed fireworks and highlights all over.

This championship will be as competitive as its ever been before.

Diarmuid Connolly was the star of the show with Donegal Boston last year and though his journey hit a snag this year, that club in particular have more than compensated with some star names such as Barry John Keane and Mark Bradley added to their ranks.

Here's our Dream Team of all the players who made it over this year, with 16 subs to boot for good measure. 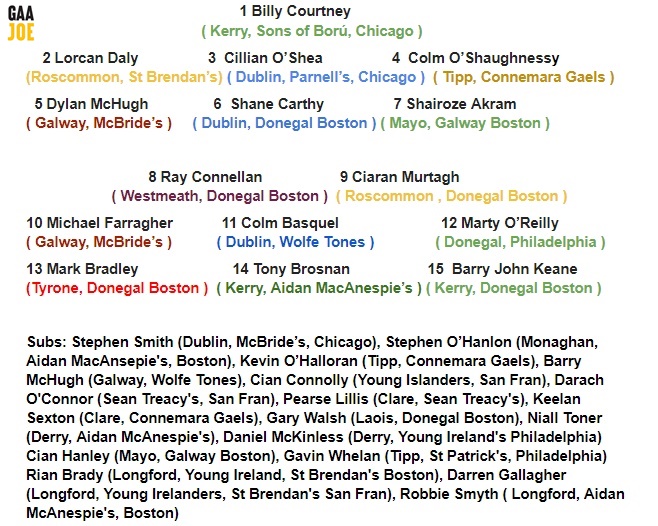 We're hoping to keep you posted on how the championship pans out over the course of the summer.


popular
Justin Gaethje tells Conor McGregor to wait his turn
The SportsJOE 12 o'clock quiz | Day 73
QUIZ: Correctly identify these World Cup 2014 players from their stickers
QUIZ: Can you name the Football Italia cult heroes? | Part 2
The SportsJOE 12 o'clock quiz | Day 72
SportsJOE 2000s Football Quiz | Round 3
QUIZ: The toughest football legends quiz you'll take today
You may also like
1 week ago
Seven-time All-Star Goldrick using time off to strengthen and improve
1 month ago
"Sometimes sport can overwhelm you, it was time for him to take a deep breath"
2 months ago
Dublin hurler Mick Carton back on the mend after winning another battle
2 months ago
"I'd spent hours and hours honing my left foot with my dad when we were young"
2 months ago
April club month a goner as virus threat causes longer delays
3 months ago
"That's not just handbags, there is a lot of really serious punches being thrown"
Next Page