Sporting calendar in disarray after behind closed doors development

And there were the GAA, anticipating an increase to 500 spectators at games, preparing for an inter-county championship.

Following on from the latest advice from NPHET, all sporting events in Ireland will take behind closed doors for the foreseeable future.

These measures were announced at a cabinet briefing on Tuesday afternoon and predictably, they have sent the people of Ireland into a fit of collective rage.

This development comes as a hugely disappointing blow for sports people all over Ireland. In the last few weeks, the return of club GAA, of club soccer and of all local sports, has put smiles on faces again. It has given a huge number of people a reason for being.

Clubs have been vigilant, players have been responsible and officials have been in overdrive. As a result, the number of outbreaks or clusters emerging on the back of sporting events has been minuscule. There has been no evidence in the public realm to suggest that sporting events have had a part to play in the recent upsurge in cases. Has anyone heard of a spectator catching Covid-19 at a GAA game?

And yet here we are, two months on from the opening of the gates, back at square one. This measure doesn't just raise eyebrows, it is a kick in the teeth for all those who have operated thermometers, filled out countless sheets of paper, disinfected cones and balls. What about the parents who bring their kids to underage games, are they expected to sit in the car for two hours?

It's not as if this virus is going to burn out all of a sudden in the next few weeks or months. It could easily remain a part of our lives for years. How long are we going to stay living half a life? 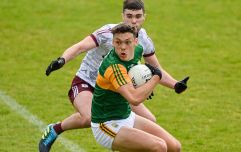 Kerry outclass Galway as David Clifford fires from all cylinders

END_OF_DOCUMENT_TOKEN_TO_BE_REPLACED

The talk is that schools will be opened in the next two weeks. How can they practice social distancing in an indoor setting if the measures are being deemed ineffective and inefficient at outdoor events?

Meanwhile, factories are re-opening, airports are getting busier. It's no wonder you see scenes like those in that Dublin pub at the weekend, when those who run the country are treating us all like children.

For sporting boards, this will come as a seismic blow. Sporting events or organisations don't run on fresh and at the moment, gate receipts were keeping many of them above water. Now, live-streams are the only form of revenue but as has been seen in the last few weeks, these can be inconsistent and don't offer the same buzz.

The inter-county season, on the back of this, would appear a non-runner. The club season has been dealt a killer blow.

Last but by no means least, how on earth is it deemed safe to play in a game if it's not deemed safe to attend? These are the actions of leaders, who are making it up as they go along.


popular
Rory O'Connor gets Wexford out of jail as Shanagher throws it back
Alisson gives moving post-match interview after scoring late winner for Liverpool
QUIZ: Can you name these La Liga cult heroes?
Conor McGregor sends message to new UFC lightweight champion
Burnley report Leeds' Ezgjan Alioski over gesture made towards Dwight McNeil
'Stop, stop, STOP!' - Texas crowd left stunned as UFC legend has arm snapped
QUIZ: We give you the year, you tell us the FA Cup winner
You may also like
1 day ago
"The lads couldn't believe how defensive they were" - Why Kerry have to change the way they play this year
2 days ago
"There's a lot of potential in that team if they get away from the counter-attack football" - Why Tyrone are so interesting this season
3 days ago
It took a brilliant piece of management from Pat Gilroy to turn over Connolly's 2011 final suspension
4 days ago
Finally, Gaelic football is returning to our TV screens - what's on and where?
1 week ago
Galway outclass Westmeath in dominant display as county hurling returns to our screens
1 week ago
Jim McGuinness explains how Donegal didn't win their All-Ireland in Croke Park
Next Page