We've all been there.

You catch a glimpse of a goal that excites you, a set of highlights you want to re-live, a red card that you need to dissect. Time to settle down and analyse.

Out of nowhere, you're hit with this bummer. 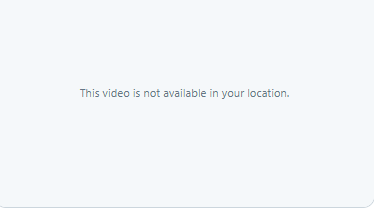 There's nothing as frustrating. You can accept it in fairness, when it's a clip from a BT Sport football game but put yourself in the shoes of a GAA fan in the north who's not allowed to watch their county play in the All-Ireland championship.

The frustration is understandable, but it's misplaced when directed at RTÉ.

A spokesperson confirmed to SportsJOE this morning:

"Those clips are not blocked in Northern Ireland and content should be available to all viewers.

"Occasionally viewers in NI are issued a GB rather than a NI-specific IP address by their internet service provider.

"In such cases RTE content will be blocked and viewers should contact their internet service provider directly."

When the skills are so note-worthy, such as the Conor Sweeney point which had the whole country fawning, it's obviously disappointing when you can't bask in the glory. But to solve this issue, you must take that up with your internet service provider, rather than the national broadcaster.

popular
Southgate explains why he didn't move drinks bottles like Ronaldo and Pogba
Cristiano Ronaldo is not human. Not human at all
Rio Ferdinand responds to fans calling him out on terrible Scotland prediction
QUIZ: Name these 50 Euro Championship goalscorers
ITV revisit Highbury tunnel incident, but viewers feel Keane asked wrong question
"Not good enough" - Roy Keane rips England a new one as Scotland keep hopes alive
Ronnie Whelan criticised for his commentary of 10th minute stoppage for Christian Eriksen
You may also like
1 week ago
"They are going to change the sliotar in some capacity but we need to be very careful"
1 week ago
The SportsJOE 12 o'clock quiz | Day 368
1 week ago
Cluxton's perfect kick opened the hearts of a city
1 week ago
Even after all these years, McCarthy still the man they all have to catch at Dublin training
1 week ago
Name every All-Ireland hurling winner of the last 31 years
1 week ago
The five worst minor GAA injuries ranked in order of annoyance
Next Page