"It's really about managing my own time. It's on me to make sure the work is done"

The life and times of an inter-county GAA player.

Conference calls. Team buses not only to games, but to training too. Late nights. Sometimes this fella mightn't be back until 1.00 in the morning. Time away from partners. Weekends are a no-go.

Chris Barrett is at the extreme end of the scale.

Living and working in Dublin, the wild west is a long way away. The trek to Mayo is as time-consuming as it gets.

But through intense levels of dedication, some clever time management and a good deal of understanding from his other half, Belmullett's Chris Barrett is well able for it.

His weeks in the capital city however, are without an idle moment as he explained in studio on Thursday's GAA Hour Football Show. 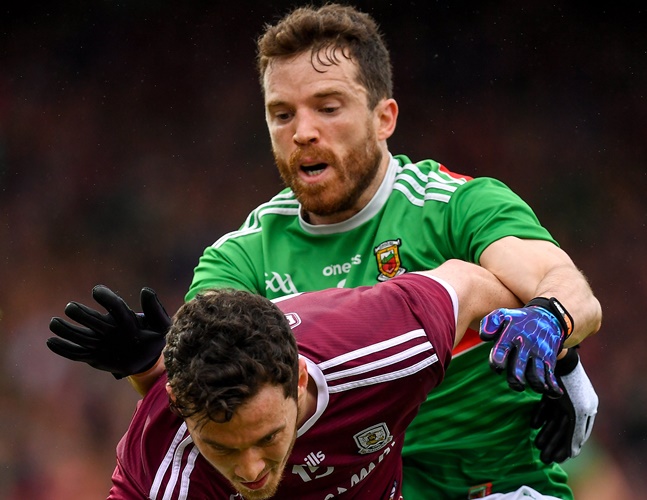 A week in the life

END_OF_DOCUMENT_TOKEN_TO_BE_REPLACED

"In terms of setting out the week, it takes sitting down of a Monday morning. Work comes first, it has to. You schedule out all your meetings, what you need to do, key task, prioritising and then it's usually a gym of a Monday evening or a recovery session."

"You've training then of a Tuesday. You do a proper gym session on a Wednesday - so that's like a bigger load than the Monday. Thursday night is free night, it's date night. Friday then, if it's a normal week it will be down home in the afternoon, leaving around 3.00.

"It's really about managing my own time. I'm lucky in the job that I'm in (construction,) I manage my own diary and projects so you've autonomy there to make sure everything is done. It's down on me to make sure the work is done so if that's coming in early or staying in late..."

In order to facilitate such a hectic lifestyle, sleep and diet are crucial.

"Sleep, diet, you're thinking about the lead up to the match - am I getting enough food in here. You go to a cafe in Dublin city centre and you get your sandwich but it only has half the meat that you need in it. Little things like that, you have to be prepared...I notice if I'm in work and I don't get enough food that day, then my output is down in the gym..."

"I'm big into the whole psychology and the health benefits of sleep, I don't sleep on the bus on the way down. A lot of the studies say a nap is no used to you after 3.00 because you're not back until 1.00 and up at 7.00 then. So if you can at least get a good block of six hours so you're not just staring at the ceiling..."

Thankfully, Barrett adds that the Mayo management are very understanding regarding the commitment. The fact that there's only one mid-week journey home shows this off.

- "We're dialled into it.
- On speakerphone or is it a bit more high tech than that?
- It's kind of a Skype, it's google hangouts"

Chris Barrett explains the Mayo conference calls designed to cut down on travel for players.

Mayo are renowned for their aggressive tacking. Barrett exemplifies this. He maintains that it's down to trial and error rather than any training ground secrets.

"In training, you're marking without that sweeper or without that safety net. The best way to teach someone is in that environment. We did a lot of tackling drills when Donie Buckley was there, on aggression and stuff like that but it's very hard to replicate the game situation," he says.

"It's just practice. The best practice is within the game setting, under pressure. The drills aren't too realistic. The way we have played, man on man in the last few years has helped us along.

"Sometimes you can get over-focused on man-marking, but if your man is out on the sideline and he's not a threat, then I do need to be aware to help out my teammates. For me, the biggest thing about defending is concentration and anticipation..."

You can watch Thursday's GAA Hour football show here, which includes the Barrett interview from 30 mins on.

You may also like
1 month ago
Mayo issue update on crunch Allianz Leagues clash with Kerry
2 months ago
James Durcan stuns Ballybofey with last kick of the game
2 months ago
"Growing up, I would always have been naturally fit"
3 months ago
Mayo confirm cult hero Ciaran McDonald has joined their coaching staff
5 months ago
"I was slow, I was never a David Clifford finisher" - Moran's modesty a genuine thing
5 months ago
"You've to work, pay bills, you've to deal with these massive changes" - former AFL star driving his club on
Next Page