"The word unsafe is the reason I'm here. It's not just for me, it's my full management team"

"That's the only reason I'm on this show right now, because that brought it into a different category."

Cora Staunton was a guest on Off The Ball last week when she claimed that she had left the Mayo ladies senior football panel because the environment in that squad was no longer healthy or safe.

"We didn't feel it was a safe environment to be in so we decided to leave...It wasn't healthy," she said.

Before then, the Mayo manager Peter Leahy had no intention of speaking on the issue of 12 players leaving the county panel. It was an issue that he hoped would resolve itself, but on the back of words like 'unsafe' being brought into it with all the connotations that it can bring, he felt the need to defend himself and his management team.

That was why he was present on Wednesday's GAA Hour podcast show with Colm Parkinson.

"The word unsafe is the reason I'm here. It's not just for me, it's my full management team. I've a chartered physio at every training session, we've live heart-rate monitoring so that none of the girls are overworked, we've stuff that no other inter-county team has, we've a meal after every training session, a fully qualified S and C coach...We have what some senior men's teams don't even have," he said. 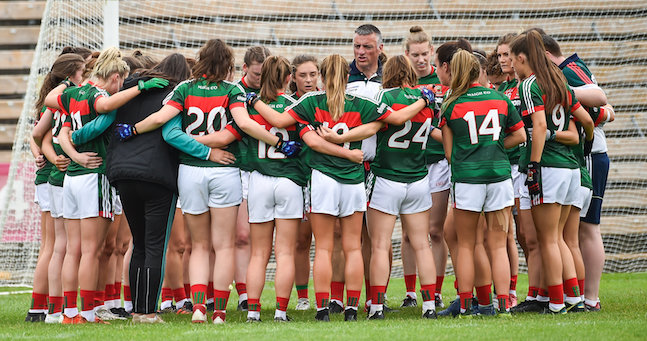 "So for this to come out as an 'unsafe welfare' issue, this puts everything into question...We've all these people who are now put into question.

"We've a liaison officer there who has to be contacted, and she's never heard a word about unsafe or unhealthy...so these are close to slanderous accusations that are now being put out there.

"If someone wants to say something to me and say, 'Peter Leahy did X, Y and Z, I'd welcome it because it has to come out in the public domain," he said.

"The reason I didn't come on to any show up until now is because it puts pressure onto the players who I hope will eventually shrug their shoulders and say 'listen I want to play football again.'"

"I don't hold any grudges...things happen, you need to move on, but the minute safety and unhealthy was mentioned, I have to protect my management team. Enough is enough now," he added.

Leahy maintains that the reason some of the players had left the panel were regarding player selection issues.

"Some of the players weren't happy with my selection, simple as that."

END_OF_DOCUMENT_TOKEN_TO_BE_REPLACED

"It was a feelings situation...I'm sorry but if we start bringing feelings into this equation, it becomes very, very muddled," he said.

Then when the player welfare issue arose, he was taken by surprise.

"I was stunned, the words player welfare completely knocked me back," he said.

You can listen to the full Peter Leahy interview with Colm Parkinson right here.


popular
The SportsJOE 12 o'clock quiz | Day 16
No fear of McCarthy losing a lifetime of fitness
Only a devoted diehard would ever get full marks in our Liverpool quiz
"Am I going to be safe? Am I going to come home healthy?" - Munster doctor joins Covid fight
You won't get top marks in this football stadium quiz
You'll have to be an old-school fan to get 20/20 in this 1990s footballers quiz
Ireland set for dramatically new look as Stephen Kenny takes charge
You may also like
1 month ago
The GAA Hour | Football | Mayo 'standing off', Congress analysis and the Tunnel row
1 month ago
Mayo issue update on crunch Allianz Leagues clash with Kerry
2 months ago
James Durcan stuns Ballybofey with last kick of the game
2 months ago
"Growing up, I would always have been naturally fit"
3 months ago
Mayo confirm cult hero Ciaran McDonald has joined their coaching staff
5 months ago
"I was slow, I was never a David Clifford finisher" - Moran's modesty a genuine thing
Next Page