At 37, and in decent nick, Paul Galvin could still do some damage at club level.

The former Kerry captain had been keeping coy on a return to club football but two loveable DJs squeezed the truth from him during a radio appearance this morning.

Galvin was on Today FM's Dermot and Dave Show this morning and, after talking a while about his new line of clothing with Dunnes Stores, he revealed he would be playing for North Dublin side St Oliver Plunkett's.

"I'm still able to do in the gym what I could do two or three years ago," he commented before dismissing comparisons with Manchester United striker Zlatan Ibrahimovic. 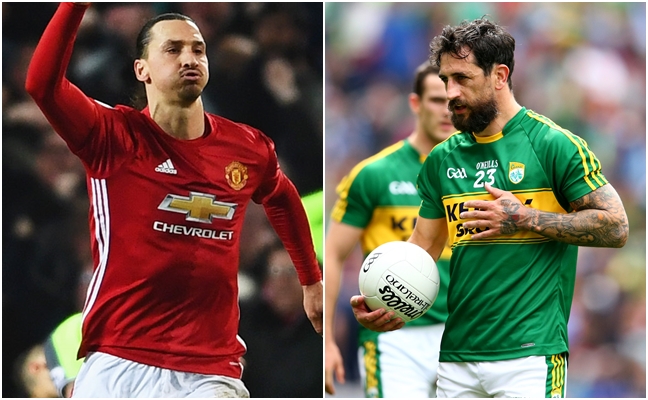 As for joining the same club side as Alan and Bernard Brogan, he said:

"Yeah, I'm going to play a bit in Dublin this year, with Plunkett's out in Cabra.

"I'm friends with a few of the boys there and there are people from home involved at board level. They are good lads and they have a very good manager."

As for the hurling, Galvin sacked it off with a resound "Nahh."

If Galvin still feels he can make a difference, it will be interesting to see how he goes.


popular
Warren Gatland mentions three Irish players as potential Lions captain
The SportsJOE 12 o'clock quiz | Day 221
"We're doing it for the group and for what's going on in the country" - Andy Farrell
QUIZ: Can you guess the football club badge?
Two changes as Ireland name team for Six Nations title decider
The SportsJOE 12 o'clock quiz | Day 220
Paul O'Connell names four Irish certainties for Lions, and one bolter
You may also like
4 days ago
No victory speech for Clifford as Cavan drop down the Leagues
1 week ago
"There’s nothing to state ‘lucky winner.' An All-Ireland medal is an All-Ireland medal"
4 weeks ago
Marc Ó Sé: Split the season, give Tony Brosnan his Kerry chance
1 month ago
Club championship just won't be the same without Tony Brosnan
2 months ago
"Even on player's bad days, you were very kind" - Seán Óg sums up O Muircheartaigh's magic
4 months ago
"I don't think forwards like when you play that half a yard in front"
Next Page