The news all Waterford fans didn't want to hear

Waterford fans knew it was coming, but that won't lessen their disappointment.

Tadhg de Burca will not participate in Waterford's All-Ireland senior hurling semi-final against Cork in Croke Park on Sunday.

The Waterford hurler's appeal against his one-match suspension was rejected by the GAA's DRA panel in the wee hours of Friday morning.

He received the one-game suspension for an incident that occurred in a recent game against Wexford. Although the helmet-grabbing footage didn't seem very conclusive, reports earlier this week gave the Deise an inkling that this decision was coming.

De Burca was cited for a category III infraction of the GAA rulebook, for "behaving in any way which is dangerous to an opponent, including deliberately pulling on or taking hold of a faceguard or any part of an opponent’s helmet (in hurling)." 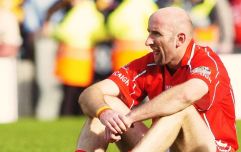 END_OF_DOCUMENT_TOKEN_TO_BE_REPLACED

The incident in question occurred when Harry Kehoe tried to stop the Waterford man from making a break up the line and de Burca seemingly reacted by grabbing him and throwing him away.

The minimum penalty for such an offence is a one-match suspension.

The throw-in for the All-Ireland semi-final between Cork and Waterford is set for 3:30 pm this Sunday.

popular
"No doubt he'll say he played shit like he normally does, but I thought it was a good game."
The SportsJOE 12 o'clock quiz | Day 144
The SportsJOE 12 o'clock quiz | Day 143
SportsJOE 2000s Football Quiz | Round 12
Three teams Leinster can pit against each other to prepare for Munster
Only a Champions League fanatic would get full marks in this quiz
Brooks Koepka puts PGA Championship leaders on notice with final round comments
You may also like
3 months ago
The man they couldn't make training hard enough for
4 months ago
Ranking the most audacious and ridiculous skills pulled off by Irish sports stars
4 months ago
The best sporting challenges to use time off to our advantage
5 months ago
Cork GAA will have fight on its hands to hang onto top prospect
6 months ago
"You grow as a person off the back of injuries...I always had the answer that drove me"
6 months ago
Cork finish with a flurry to stride away from improving Tipp
Next Page