"They're so in tune to their bodies. They know how to prepare themselves."

Michael Murphy spent just the week with Clermont Auvergne and he soaked up every single experience.

When the Donegal forward was in the South of France with the Top 14 rugby giants as part AIB GAA's TheToughest Trade, he came home with a heap of learnings. The show also featured Shane Williams taking on Gaelic football with Murphy's club, Glenswilly.

We caught up with both men ahead of the show's first airing and found they had a greater appreciation of each other's sport. Williams declared:

"I couldn't get over the amount of running you had to do in training."

For Murphy, the running wasn't a bother. The professional rugby workload and increased gym and video analysis work was an eye-opener. So was just about every dealing he had with Clermont [and soon-to-be Ulster] coach Jono Gibbes...

.@murphm95 got a taste of what the @UlsterRugby boys are in for next season with Jono Gibbes! Tune in tomorrow, 9.30pm, @RTE2 #TheToughest pic.twitter.com/ETzKqryZgD

While Williams noticed a large emphasis on running, and having the gas to motor around large GAA pitches, Murphy was taken aback by the gym work... slightly! He says:

"There's probably a big emphasis on gym sessions, they're doing one every day or other day. They really go at it  as a session.

"Here in Gaelic Games, the gym session is probably supplementing what you do on the pitch. There, it's every single bit as important as their training field day.

"The body exercises that you do are very similar. I was kind of surprised in that way, you're not a huge million miles away from what they do. Again it's a professional set-up and the amount more time they do, they're able to go that wee bit more specific to what the player needs." 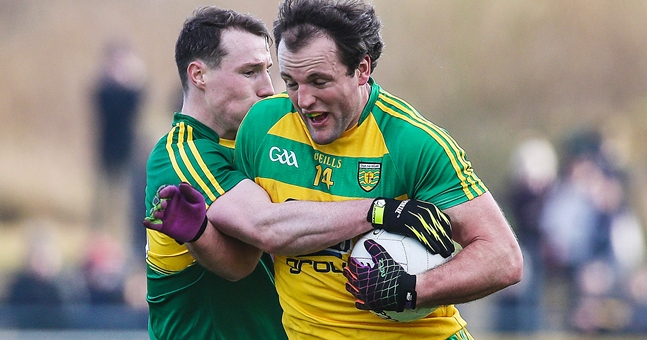 The other big difference Murphy observed was how much time and preparation goes into playing a professional rugby match, as opposed to rocking up from work, college or home just before a GAA training session.

"Whereas back here, like with me now I'll be up the road, you get out of the car, everything is done within 10 minutes, you get out on to the training ground and that was the big difference.

"It's cliched to say there's less recovery in Gaelic football but to actually experience it over there in a week, that was a big thing."

Murphy was in fine form for Donegal against Dublin at the weekend so whatever extras he picked up from the rugby boys must be helping.

popular
Peter Sagan pays classy tribute ahead of Sam Bennett's big moment
Irish cyclist Sam Bennett delivers classic putdown to British cycling magazine
Sam Bennett admission shows how incredible his final stage win was
Luke Shaw steps up to make common sense plea to Ed Woodward
The SportsJOE 12 o'clock quiz | Day 183
"I didn't like how it came about, what with happened to Drico" - Gareth Thomas
The SportsJOE 12 o'clock quiz | Day 182
You may also like
8 months ago
QUIZ: Name the 32 counties from these club championship winners
1 year ago
'The Iceman' inspiring Neil McManus to get the best out of himself and the Glens of Antrim
1 year ago
The club that started the year with no manager and ended up in an All-Ireland final
1 year ago
Quiz: Which classic club GAA player are you? Take the test to find out
1 year ago
Dr Crokes have a simple way to produce good footballers but not enough clubs do it
1 year ago
The best club football 15 in recent history
Next Page