The men of Mullinalaghta arriving home, shoulder to shoulder, Leinster cup aloft is what it's all about

If Mullinalaghta can do it, why can't your club?

A club of 155 members against a club of 4800. A club who amalgamates underage and can still barely field against one of Dublin's super clubs. A club from a county who had never had a representative in a Leinster final before against a club who alone, have won four.

St Columba's Mullinalaghta against Kilmacud Crokes. The previously unheard of underdogs against one of Ireland's most successful ever clubs. 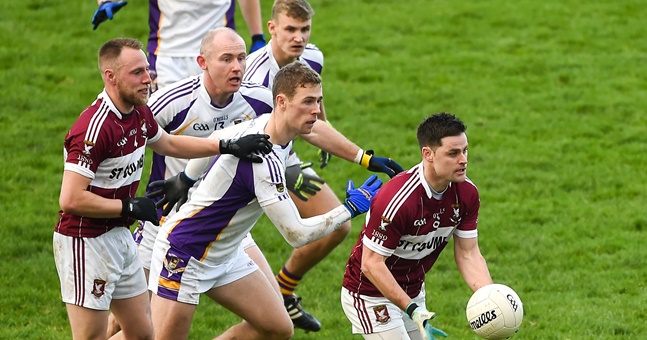 Wrong, and what transpired when David met Goliath in O'Connor Park on Sunday afternoon is the most beautiful thing of all the beautiful things about club GAA.

Mullinalaghta went out and they defeated all the odds on their day of days, their man Paddy Fox keeping one of the country's best forwards quiet and that act typifying and summing up the scale of their achievement.

After the game, they roared out, "We're from Mullinalaghta, we just won the Leinster Cup! Allez, Allez, Allez."

On Sunday night, the team returned to the other half of their parish in Gowna, holding the cup aloft to loud cheers from the locals.

popular
The SportsJOE 12 o'clock quiz | Day 142
SportsJOE 2000s Football Quiz | Round 12
Only a Champions League fanatic would get full marks in this quiz
Collin Morikawa makes huge world rankings leap as Lowry drops back
Brooks Koepka puts PGA Championship leaders on notice with final round comments
Rory McIlroy defends Dustin Johnson after Brooks Koepka comments
United through but impenetrable goalkeeper has everyone enquiring
You may also like
1 year ago
Injury and the odd soccer regret, but Longford's finest is delighted to be back with her first love
1 year ago
"It seems very cruel on him" - America ruling very harsh on GAA players
1 year ago
"After training there’s tea and sandwiches, and that rotates around every family in the parish"
1 year ago
Dublin players getting county transfers and here's how they're qualifying for it
1 year ago
"It's all going up on the team WhatsApp, about Leo Vardadkar commenting on it there"
1 year ago
GAA team of the weekend
Next Page