The only good news for Mayo is that they will still avoid Dublin until the final.

The bad news is that, rather than playing Roscommon or Leitrim for a place in the All-Ireland quarter-final against what would've been a qualifier side, Mayo now have to win three games against potentially tough opposition only to set themselves up for a nightmare in the last eight.

Mayo have been drawn into Round 2A of the qualifiers, meaning they will stay separated from the B side of the championship until the final. There's no reason for this, it's just allocated based on when you play as means of helping counties better plan fixtures. (I know...)

Here's what Mayo are facing from here on in - should they continue to advance.

Mayo will be drawn against any of the following who still have to play in Round 1A.

The winners of Round 2A will then play each other in Round 3A. Along with Clare and the other losing provincial semi-finalists from Donegal/Tyrone and Meath/Kildare, Mayo will take on the winners from 1A as listed above (and they'll do that in 2A).

Then, in Round 3A, their opposition is one of the following (the two different groups below will have faced each other in Round 2A):

At this stage, the provincial final losers play the winners of the qualifiers. The A side will meet with the Connacht or Munster finalists.

Mayo can't meet Galway until the semi-finals (if it can be avoided) but Galway probably won't be in the qualifiers anyway. Here's who Mayo could play if they make it that far.

Because Mayo are on the A side, they avoid Ulster and Leinster in the quarter-finals.

END_OF_DOCUMENT_TOKEN_TO_BE_REPLACED

However, they will also not play Galway should both make it that far.

The rule here is: 1) Two teams who met in a provincial final cannot meet again; 2) If a provincial champion (Galway) met a team earlier in the championship (Mayo), they cannot meet - if that can be avoided.

What happened last year with Kerry and Clare was an example of this A and B system not working. Kerry already met Clare in the Munster semi-final but both Clare and Tipperary made it through the A section of the qualifiers where they were Kerry's only possible opponents. Kerry had just beaten Tipp in the provincial decider so they were immediately out of a pairing with Kerry again and that left only Clare.

It won't happen this year.

*If Galway win the Connacht championship, Mayo would automatically play the Munster winners.

That leaves them looking at a potentially very tricky run just to make it back to the All-Ireland semi-final, a place they've seemingly taken up permanent residence in. 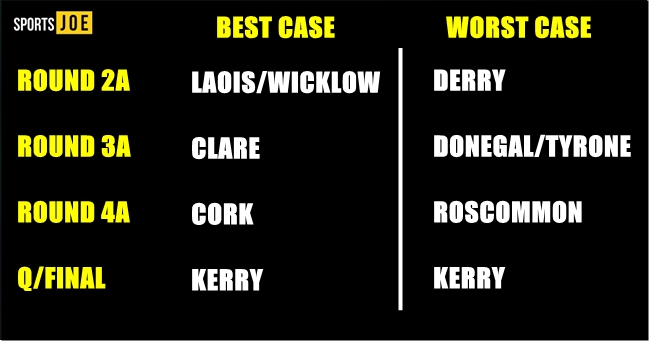 END_OF_DOCUMENT_TOKEN_TO_BE_REPLACED

Cork and Roscommon probably wouldn't differ too much in the eyes of the wider public but, unless Leitrim shock the Rossies in the Connacht semi-final or Cork shock Kerry in the Munster decider, it's going to be between Cork and Roscommon to play Mayo for a place in the quarters.

When they get there, Kerry looks to be the only way - unless, again, Roscommon or Leitrim win Connacht.

*If Roscommon win Connacht, Mayo could still face them in the quarter-final.

If Galway won Connacht, Mayo could then meet them in the semi-final but the Tribesmen would likely meet tough quarter-final opposition in the like of Meath/Kildare, Donegal/Tyrone, or Kerry/Cork.

You may also like
5 months ago
The GAA Hour | Football | Mayo 'standing off', Congress analysis and the Tunnel row
5 months ago
Mayo issue update on crunch Allianz Leagues clash with Kerry
6 months ago
James Durcan stuns Ballybofey with last kick of the game
6 months ago
"Growing up, I would always have been naturally fit"
7 months ago
Mayo confirm cult hero Ciaran McDonald has joined their coaching staff
9 months ago
"I was slow, I was never a David Clifford finisher" - Moran's modesty a genuine thing
Next Page