Mayo recall Moran, Clarke and Boyle for date with destiny

Three experienced campaigners have been brought back into the starting 15.

Mayo take on Down at Páirc Esler this evening (7pm throw-in) and James Horan is relying on his old-stagers.

Andy Moran, Colm Boyle and goalkeeper David Clarke are all back in the starting team as Horan makes five changes from the side that lost the Connacht semi-final to Roscommon.

Selecting Robbie Hennelly over Clarke was one of Horan's big shout's but the 35-year-old, who is a two-time All Star, is back in nets. 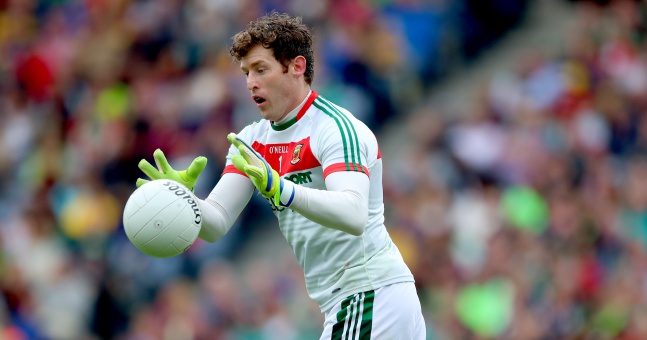 Boyle returns to the Mayo defence while 2017 Footballer of the Year Moran is in the full-forward line. Diarmuid O'Connor and Aidan O'Shea are in midfield.

The big blow for Mayo is the fact that Cillian O'Connor misses out on the matchday squad entirely. O'Connor played 20 minutes of a challenge match against Clare, last weekend, but does not even make the bench for the All-Ireland Qualifier.

Seamus O’Shea, James Carr and Donie Vaughan have all missed out due to injuries picked up in recent months.

ICYMI Here is the Mayo team to face Down tomorrow evening at 7pm in Newry. #mayogaa #gaa pic.twitter.com/ywxRz8d1VM

popular
Roy Keane's first impression of Cristiano Ronaldo proved to be very accurate
The SportsJOE 12 o'clock quiz | Day 290
Lady Gaga will perform Satanic ritual during Super Bowl halftime show, according to conspiracy theorist
Jurgen Klopp chases Sean Dyche down Anfield tunnel after half-time fracas
"I kind of decided on Hill 16, 'you're either going to do this or you're not going to do this.'"
Manchester City suffer Kevin De Bruyne injury blow
Jurgen Klopp on that Anfield tunnel run-in with Sean Dyche
You may also like
2 weeks ago
"Never once did he make it about himself. Never once did he complain" - Moran's tribute to fellow soldier Clarke
2 weeks ago
After 20 stellar years of service, David Clarke has hung up the gloves
4 weeks ago
GAA JOE All-Star Gaelic football team
1 month ago
"Cillian O'Connor, amazingly, didn't even flinch at what was said by Philly"
1 month ago
Mutual respect between Fitzsimons and Keegan a stirring sight
1 month ago
Dublin and Mayo players clash in tunnel at half time
Next Page