Mayo have added some fresh faces to their panel this year but the experienced quarter of Cillian O'Connor, Colm Boyle, Aidan O'Shea and Andy Moran inspired them to victory.

James Horan's side joined Dublin, Tyrone and Kerry, who defeated Meath at Páirc Tailteann, in the All-Ireland semi finals after overcoming a slow start to see off Donegal.

Donegal were fasted out of the traps and went two points clear, thanks to Paddy McBrearty and Niall O'Donnell, before Paddy Durcan swirled one over for Mayo.

The home side then dropped the hammer and harried Donegal for the remainder of the half and would have been further ahead at the break had they taken more of their chances. Shaun Patton sprung from his line to deny a Darren Coen shot on goal but scores from James Carr, Cillian O'Connor, Jason Doherty and Chris Barrett edged them in front.

Aidan O'Shea was driving his side on, and winning a rake of possession around the middle, but Mayo lost the experienced Keith Higgins to a black card mid-way through the half.

Michael Murphy added a couple of frees for Donegal but it was Mayo that finished the half well and Cillian O'Connor's 30th inter-county goal (below) had the Castlebar crowd roaring. HALF-TIME: Mayo 1-7, Donegal 0-4.

Cillian O'Connor with that all-important goal for Mayo pic.twitter.com/3OTxe8t7VQ

Mayo took their time coming out for the second half but Donegal were ready and waiting for them. O'Donnell curled over a superb point and then, on 41 minutes, referee David Gough awarded a penalty against Lee Keegan as he was grappling with Michael Murphy.

Murphy got up, dusted himself down and cooly slotted his spot-kick into the bottom right-hand corner. 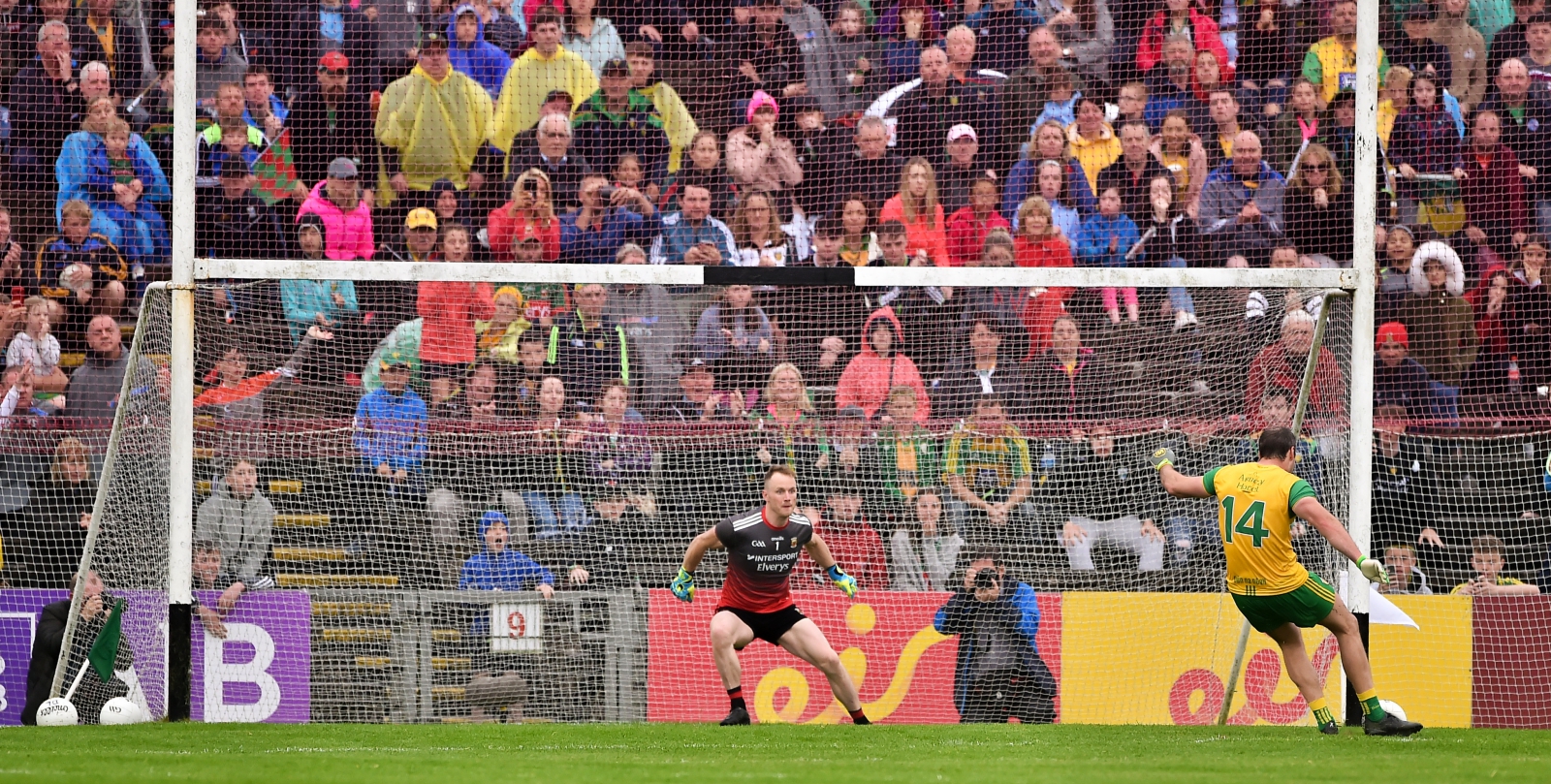 There was a major flashpoint after the goal when Hugh McFadden flattened Aidan O'Shea as players from both sides jostled to get back into positions for Robbie Hennelly's kick-out. He was fortunate to just see yellow.

Kevin McLoughlin pointed soon after coming on for the injured O'Doherty before Donegal - with the floodlights switched on at 7pm in this changeable Irish summer - hit back through McBrearty, Daire O Baoill and Murphy. Suddenly, with 18 minutes to go, it was a one-point game.

Shaun Patton produced another crucial save, denying first half sub Andy Moran, but Paddy Durcan edged his side two clear with a fine point. Donegal had excelled themselves in getting close but they wasted several opportunities [from play and frees] to draw level. They were not helped, either, when Eoin Brennan was black-carded.

On 62 minutes, Keegan missed a glorious chance to settle the tie when he raced through on Patton's goal before skewing a shot high and wide. A touch more composure would have seen James Horan's side go six clear but, as it stood, the lead was three with seven minutes to go.

O Baoill popped over another point and Donegal were poised to grab another before Aidan O'Shea chased back to win his side another vital turnover. Moran then won his side a free and handed the ball to O'Connor to put his side three clear again.

Murphy steepled one over for Donegal before Moran restored his side's lead and the home fans raised another roar when midfielder Matthew Ruane returned to the field after an injury lay-off. Moran did two Donegal defenders to stretch the Mayo lead to four points and the home supporters were beginning to believe.

Donegal could not muster magic in added time and the final whistle saw Mayo reach their eighth semi final in nine years.

OUR MAN OF THE MATCH: Aidan O'Shea (Mayo)


popular
Referee Mathieu Raynal puts Sexton in his place after TMO mess
Sexton compares "brilliant" Irish debutant Craig Casey to Jonny Wilkinson
Tadhg Beirne now delivering what so many of us knew he was capable of
Owen Farrell rages at referee Pascal Gauzere as Wales catch England sleeping
Will Connors locks down No.7 jersey with two rapid succession plays
The SportsJOE 12 o'clock quiz | Day 308
QUIZ: How well do you know Manchester United players of the 2010s?
You may also like
1 week ago
25 years after her Mayo debut, 39-year-old Cora Staunton is still scoring for fun
1 week ago
De Búrca keeping positive as Fenton and Hegarty are the top dogs
1 week ago
Cavan make history as Dubs dominate the 2020 Football All-Stars XV
3 weeks ago
Rowe and Sheridan make the magic happen as Irish impact continues Down Under
1 month ago
He'll be remembered as a footballer but Keith Higgins has always been a hurler
1 month ago
Parsons bows out having left everything on the field
Next Page