Laois have done it.

They have beaten the Dublin hurlers for the first time since 2005. One week after winning the Joe McDonagh Cup, they have done the impossible in O'Moore Park to eliminate the fancied Dubs and to book their place in an All-Ireland quarter final against Tipperary next weekend.

Dublin were rattled, they were all over the place, but this is Laois' day.

Eddie Brennan's men were inspired in their home patch. Ryan Mullaney was a colossus at centre back, Willie Dunphy was a neverless killer in attack, Enda Rowland was a hero. They were all heroes.

Laois have done it.

There was a passage of play in the first half that summed this game up. Danny Sutcliffe won a ball out along the sideline and shaped up to shoot. Tom Connolly broke inside and with a lovely disguised pass, Sutcliffe picked him out with a lovely hopping ball. An easy one to take.

Connolly fumbled. Jack Kelly, that war-hound of a Laois half back smothered. He drove out of defence and found Cha Dwyer, who lamped it up the field into the acres of space that was at the Laois forwards' disposal.

Dublin didn't seem to know what they were trying to do. They couldn't string more than one pass together without a bad touch or an overcooked strike. Laois on the other hand, were wired to the moon but they were tuned in too.

Playing as a sweeper, John Lennon hit more ball than most hurlers would in a wall-ball session. Cha Dwyer was throwing himself around like a boxer chasing a knockout in the last round. A ball broke between the busty Ballinakill wrecking ball and Sean Moran. Moran went to bury him out over the line. Cha was clever. He was aware that Moran's momentum would send him flying. That the ball wouldn't budge either. He ducked under it and set up a score for Willie Dunphy.

END_OF_DOCUMENT_TOKEN_TO_BE_REPLACED

Cha was stuck in the middle of everything in that first half. Like Cheddar Plunkett says, there is no reverse gear in him.

Here's his stat graph from that first half. Each X is where he picked the ball up, each tick indicates a score and each circle is an assist. 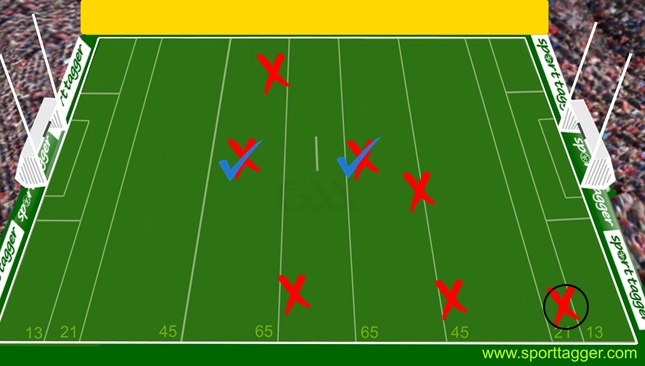 Cha Dwyer's stat graph from the first half. Each X indicates each possession he had (7). Each circle indicates an assist from the position. Each tick indicates a point.

Dunphy was on the same wavelength alongside him. He was just after setting up his unrelated namesake Aaron for a goal. Willie gets most of the credit there. He chased down a dead ball and kept it alive. Then he rounded Sean Moran like the Cuala man has never been rounded before.

END_OF_DOCUMENT_TOKEN_TO_BE_REPLACED

By this stage the Laois crowd were going buck mad. Paddy Purcell was giving Sean Treacy the runaround of his life in midfield. He scored a majestic long-ranger to get them going.

Roddy King was dropping deep but the distance doesn't seem to faze him. He buried one over from so far out he was nearly perched in Father Browne Avenue.

But Laois wanted more. With Willie Dunphy hitting a poor and uncharacteristic wide, they shook their heads and they cursed. They wanted more and more. They were six points up with five minutes to play in the second half.

For Dublin, Ronan Hayes was the only one awake. He kept them alive with a couple of brilliant scores.

Five points up at half-time. 'This is hurling country,' bellowed an elderly man wearing a Laois jersey in the crowd.

Five points up at half-time but Laois want more

END_OF_DOCUMENT_TOKEN_TO_BE_REPLACED

Another passage of play told a lot in the second half. That man Sutcliffe was again involved. He was coming into the game now and having dropped deep, he did well to intercept a rare loose Laois pass.

He looked up the field and there was acres in front of him, nobody next or near him. There was also no-one running in Sky Blue though and he buried it straight out over the sideline.

They picked up where they left off. Jack Kelly was still mopping up ball everywhere and Paddy Purcell was still running in straight lines.

Dublin were getting better though. Danny Sutcliffe was driving it. The St Jude's warrior hit two brilliant points and nearly had a goal only for Enda Rowland's brilliance. Cian Boland was beginning to play and Shane Barrett came out with a few balls.

Missed frees from Oisin O'Rourke were costly. The Laois train was only gathering momentum. Willie Dunphy, that Clough Ballacolla genius pointed them the whole way home.

Enda Rowland scored a couple of rakers from miles, absolute miles downtown while Ryan Mullaney was again, a giant.

Maybe that elderly man was right. Because Laois for a couple of seconds, felt like the home of hurling.


popular
The SportsJOE 12 o'clock quiz | Day 103
James Haskell on text exchange with Peter O'Mahony after Ireland's victory over Scotland
SportsJOE 2000s Football Quiz | Round 8
The SportsJOE 12 o'clock quiz | Day 102
"The academy boys have turned into small monsters over the past few weeks" - Peter O'Mahony
"I have more work done than any player in Ireland" - The Trevor Giles tribute show
Can you name the first clubs these players went to after leaving Celtic?
You may also like
1 month ago
Seven-time All-Star Goldrick using time off to strengthen and improve
3 months ago
Dublin hurler Mick Carton back on the mend after winning another battle
3 months ago
"I'd spent hours and hours honing my left foot with my dad when we were young"
3 months ago
April club month a goner as virus threat causes longer delays
4 months ago
"That's not just handbags, there is a lot of really serious punches being thrown"
3 weeks ago
The SportsJOE 12 o'clock quiz | Day 81
Next Page