"This is what your really dreamed of, since you were a wee girl."

Maeve Kelly has been obsessed with camogie, and Antrim camogie, for as long as she can remember. It was always her goal to help her county to major honours and trips to Croke Park.

Even still, she got a chance to make a real impact earlier than she expected. 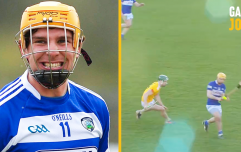 END_OF_DOCUMENT_TOKEN_TO_BE_REPLACED

Called into Antrim's senior camogie panel when she was still playing minor, Kelly and Roisín McCormack were brought in to inject some youth, vitality and fearlessness to a team that was going through tough times.

"At that stage," the Ballycastle native says, "Antrim wasn't going too well. It was more of a team that was put together.

"It wasn't the nicest of welcomes compared to [current teammate] Áine Magill, who has had it so easy coming onto a squad that is so well developed and a lovely one for her to walk into. She just fitted in so well. But whenever me and Roisín were coming up, it wasn't maybe the nicest of situations as well, for some people.

"For me, it definitely benefitted my career as I just needed as much experience as I could get. I was stepping up to senior with my club, too. The experiences I got from playing across these different squads really helped my game. Sometimes you get a target on your back, being a forward, so having the chance to play those other county teams, and being that young, having to build up your strength, that has definitely helped me cope with playing in games at the moment." 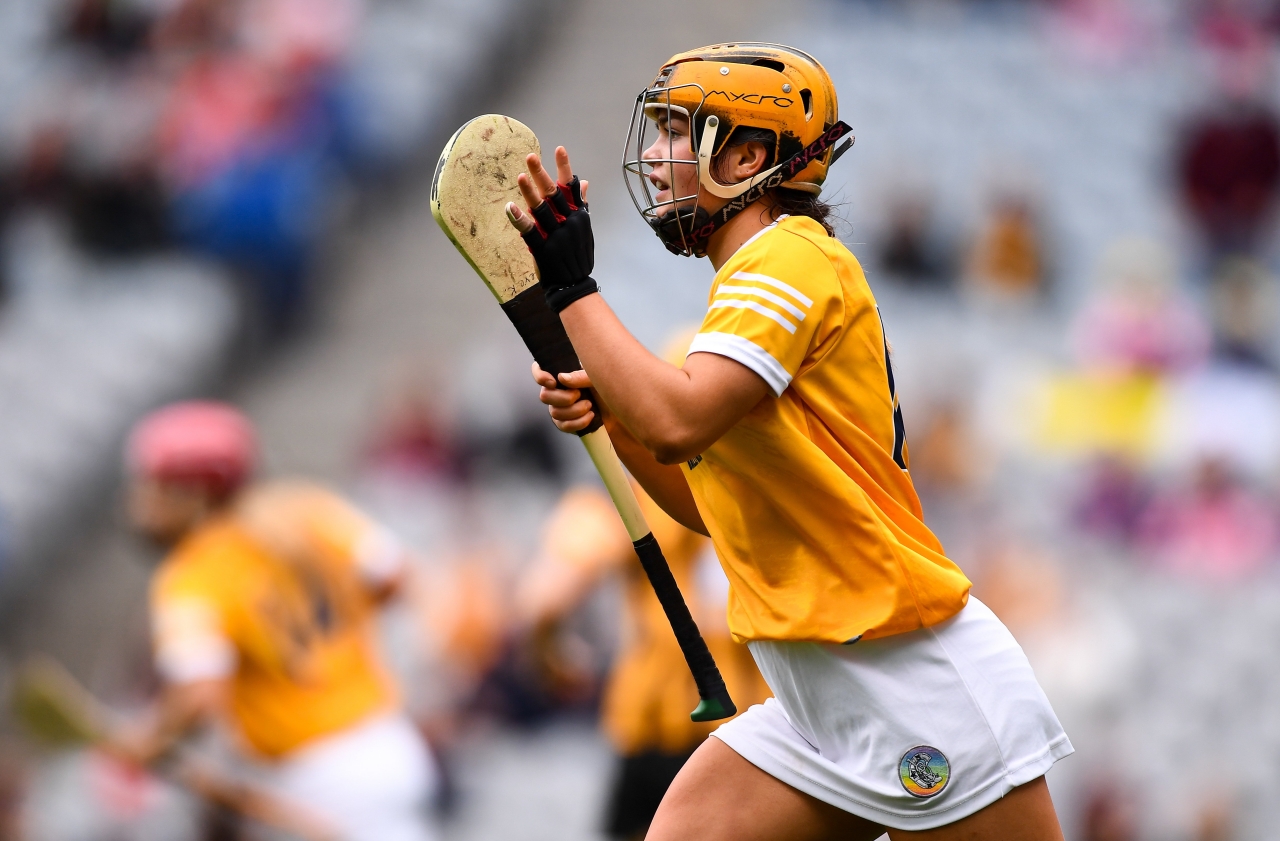 Maeve Kelly of Antrim after scoring her side's first goal during the All-Ireland Intermediate Camogie Championship Final against Kilkenny. (Photo by Ben McShane/Sportsfile) 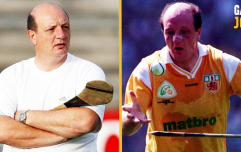 END_OF_DOCUMENT_TOKEN_TO_BE_REPLACED

Led by Paul 'Humpy' McKillen, who is from Kelly's own Ballycastle club, Antrim started to get their act together. Sisters Elaine and Lucia Dowds came in to help with sessions and there was extra stick work with McKillen and Jim 'Jingo' McKernan.

It started to pay off on the field, and even though sometimes the results did not go their way - such as their two recent encounters with Down - the panel felt they were heading in the right direction.

This summer, all the pieces fell into place and Antrim stormed to an eight-point victory in the All-Ireland Intermediate Camogie final. Kelly had a flyer at Croke Park and drove home 1-5 for her side.

END_OF_DOCUMENT_TOKEN_TO_BE_REPLACED

Following the game, the 20-year-old, paid tribute to a woman that was an inspiration to her, in life and in sport. Karen Coyles was Antrim's goalkeeper when they won a Junior All-Ireland in 1997. After winning Player-of-the-Match in that Intermediate victory, Kelly spoke of going to Croke Park with Coyles, her mum and friends and how much that trip stayed with her.

Coyles passed away in 2011. She was reported missing two weeks before her body washed up on shore in Scotland. She was only 47.

"That's definitely one of my highlights from everything I can remember about going to camogie," says Kelly of that trip down to Croker.

"It was 11 years ago when I went to watch Antrim intermediates play at Croke Park, and I think they drew that game. I can remember it so vividly, going down in the car with my mum and my other friends. Karen was such an inspiration to all of us.

"I remember her coaching us and me just wanting to be on the ball, all the time, just so I could show her what I could do. I absolutely adored her. She was such a close family friend.

"Going down to Croke Park that day was just so unbelievable. It's on of those memories I'll always go back to. Then, obviously a few years later and with all that happened... but just to be even back there for her [10-year] anniversary, at Croke Park.

"Being at Croke Park for the first time, playing, is nerve-wracking for anyone but, for me, I was sort of chilled out all week. In the back of my head, I just knew that Karen was going to be there with us and whatever happened, happened.

"People would ask me if I was scared of having to play well or put in a big performance but I was like, 'You know what, thinking of Karen sort of helped me to relax'. Things will happen for whatever reason they'll happen. She'll help me have a good game and help me get through it, and hopefully we'll get the win in the end.

"That whole situation really throws some people off but, for me, it helped me relax and just enjoy the game. I did have a very good game in the end, so I'm just thankful." 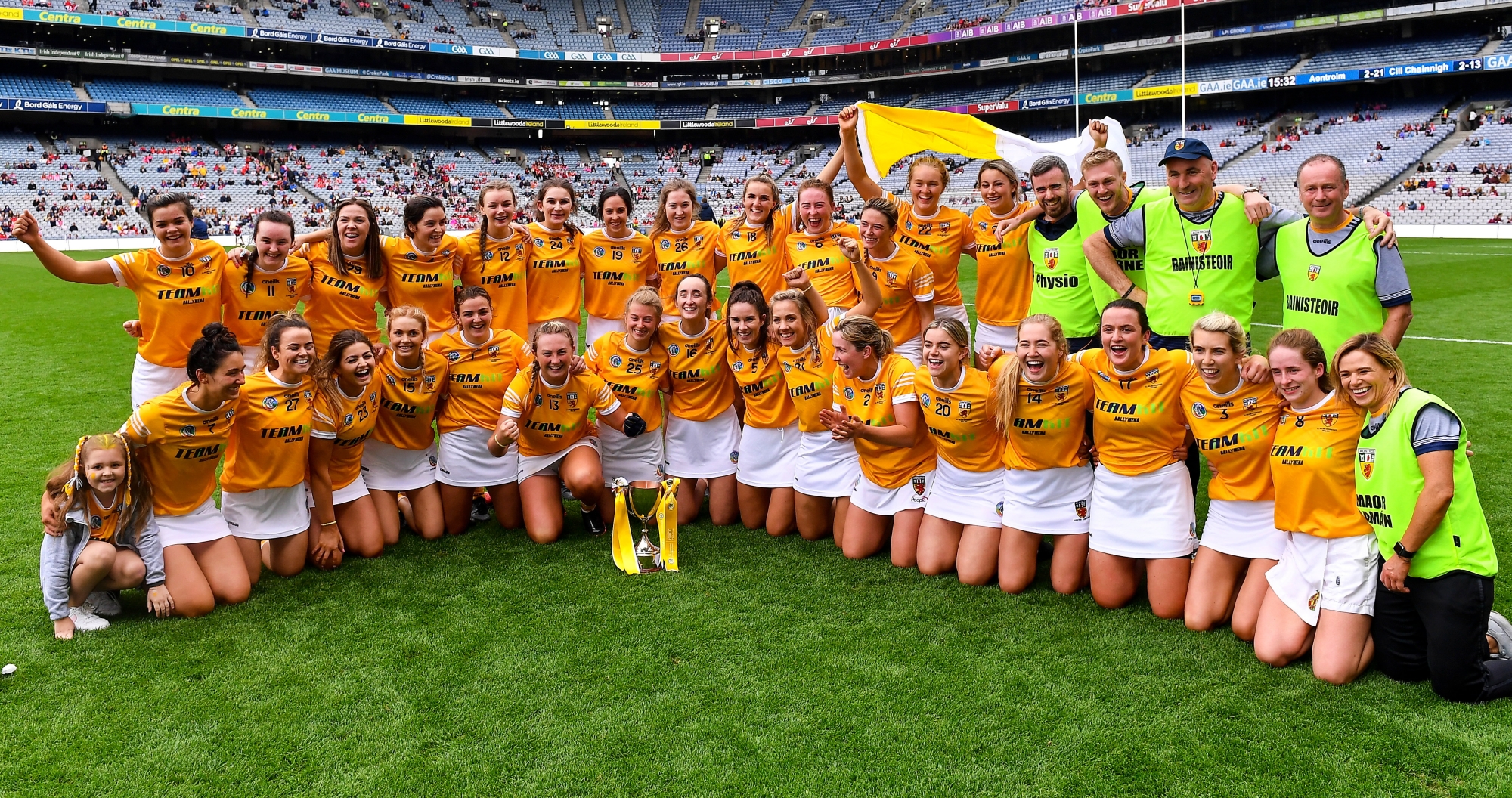 Kelly hails from Ballycastle and it is very much hurling country. Drive through the coastal town and you'll see bars like O'Connor's festooned with colours on big game days. Up and down the town, you'll see young men and women strolling about with a hurley by their side or slung over their shoulder.

"I just love playing for Ballycastle," says Kelly. "My mum's a big part of the club as well. Just growing up, we have been successful enough.

"Our big rivals would be Loughgiel, about 15 minutes away. Then obviously the school in Ballycastle as well, everything has been so close. The school definitely for me has been the turning point in my career in camogie, Cross and Passion, we've been very successful in terms of that because we would have pulled players from Ballycastle, Loughgiel, they were probably the main two clubs which we fielded our school team out of.

"We got to, I think, four All-Ireland finals. Unfortunately we didn't win any of them but I had nine Ulster medals coming out of school with and other awards so that's been probably the highlight of my career, the turning point to drive me on to try to be as successful as I can, me and a few others like Roisín.

In GAA, there is often no rest for the talented. This winter will be spent back with the club and then preparing for Division 1 camogie in 2022.

"This is what your really dreamed of, since you were a wee girl," she says. "Most of us just always wanted to be the best players that we can be.

"And now the fact that we’ve got to the top league and we’re going to be playing against and challenging the best teams and the top camogie players in Ireland is just incredible. It’s an amazing feeling."

As the interview with Kelly is wrapping, I ask her if she has any words for my daughter, Caitlin, who is off to her her camogie training session [that evening] with Sallins.

"I've been in all the schools, all week, and you'd just want to see their wee faces," se proclaims.

"They ask what's the best part of playing camogie - it's just going out and making friends.

"As long as you enjoy it, and have fun, just don't put pressure on yourself. Everything will come in its own time. That's the most important thing - go out, make friends and have as much fun as you can." 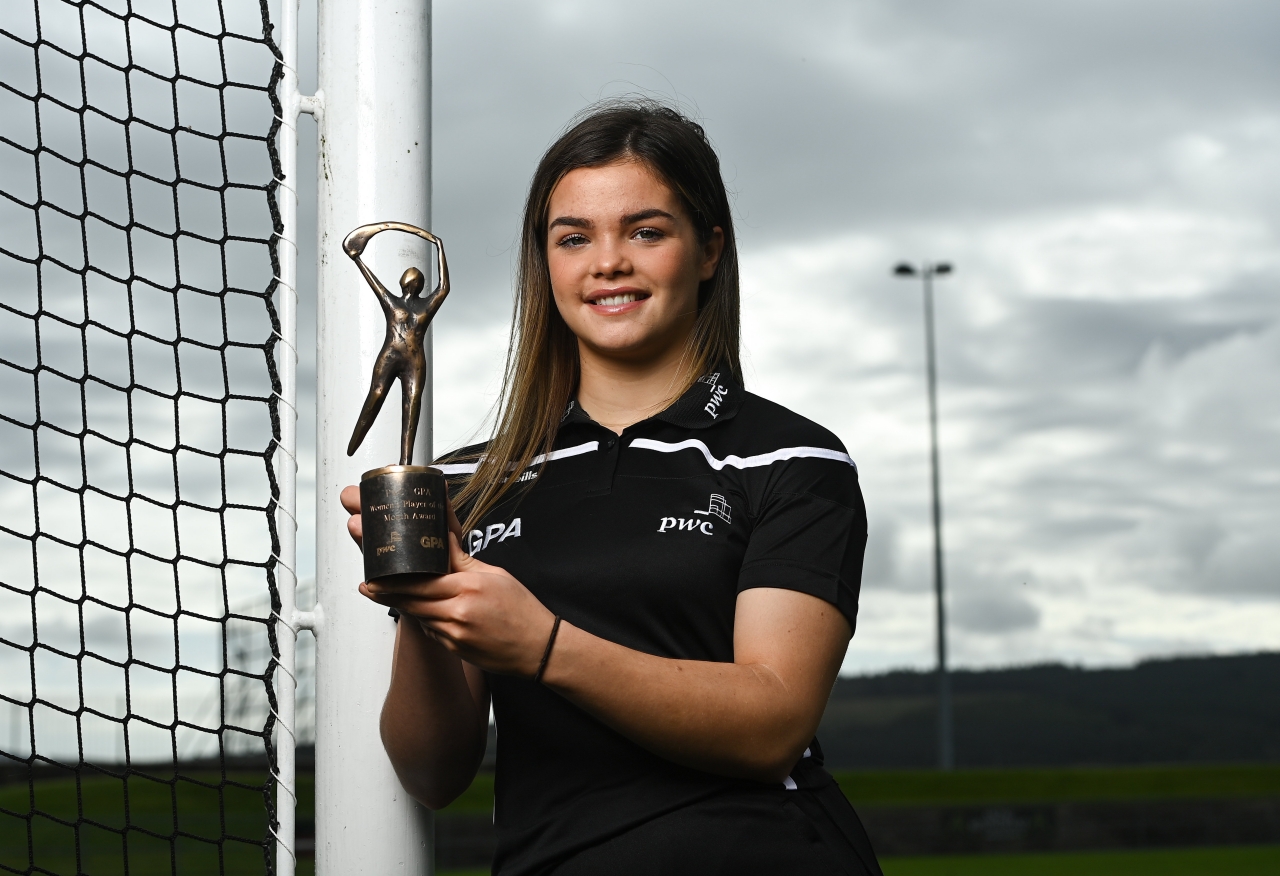 PwC GPA Women’s Player of the Month in camogie for September, Maeve Kelly of Antrim, with her award at her home club Ballycastle Camogie Club. (Photo by Piaras Ó Mídheach/Sportsfile)