"There was a lot of sledging going on...this thing has creeped into the game now"

There's no harm in the odd word.

That's a part of the game. Emotions are running high and wild and players will lose the run of themselves on occasion. A fistpump in front of an opponent, a wink or a nod at the scoreboard. A bark or a tap on the shoulder after a wide ball.

These things happen in games and some players live for it. It gets their competitive juices flowing, gets them riled up and makes a real game of it. And barely an eyelid is batted.

But it's when this macho type act goes a bit too far, that's when people and players forget the reason they're playing the game in the first place.

Like many of us, Donegal's Brendan Devenney was an interested observer of Wednesday night's county final trilogy clash between Gaoth Dobhair and Naomh Conaill.

Congratulations Glenties, who after over three hours of football, are Donegal county champions for 2019 🏆 pic.twitter.com/oWNy8BVQcm

One negative aspect that struck him about the game though, was the verbal battle that persisted the night long between the rivals.

"Do you know what's happening in the game as well," says Devenney on Wednesday's GAA Hour Show, "not to be negative or anything but there was a lot of sledging going on. Both teams were really going at it verbally," he said.

END_OF_DOCUMENT_TOKEN_TO_BE_REPLACED

Sledging was a big part of the game a couple of years ago but you would like to have thought we'd moved on. Devenney saw it on a consistent basis - and the consistency is the most worrying part - in Ballybofey.

"We all know what it was like - you'd get an odd touch if you kicked a wide or whatever, but this thing has creeped into the game now where it's consistent like. I seen players in other players ears nearly for the full match, it's a bit of a disaster - if you can't take a guy on in the skills of the game...sure enough, have a word the odd time and you can give him a touch - I don't mind that side of the game, but this consistent thing, it must just drag people into it..."

Across the three games, there was only one goal scored and on the topic of defensive systems, Devenney - who once kicked 0-14 in a Donegal championship final for St Eunan's - found himself longing for a kick-pass and some risk-taking rather than this risk averse, conservative game.

"Looking at the tactics of that game, it's such a robotic system of everybody playing the same way, the ball never gets kicked, never gets kicked. It's all about recycling, it's just trying to get into a zone where maybe you'll get a free or someone comes on the back onto a ball. It's never kicked inside, there's no platform inside. That's what they do, that's what they stuck to. 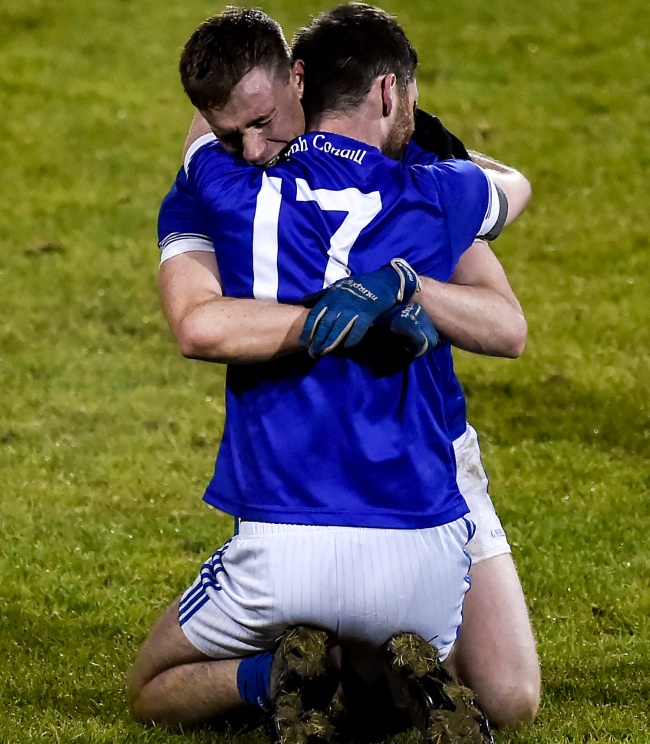 "How these teams play - even when they do get into the lead, they don't go for the other team, they automatically sit back. Sure there's never anything too much in it. It went out to three points a couple of times, but then Gaoth Dobhair or Naomh Conaill would sit back and let the other team back into it..."

All in all though, it's a huge achievement for Naomh Conaill, and Devenney paid tribute to their grit and resolve.

"They won their first title in 2005 and I'd say this one was right up there in terms of the importance of it after what these lads have put in across the last three years..."

"Hats off to them, coming up from adversity, you can't take it away from them..."

You can watch the latest GAA Hour show here.


popular
Conor McGregor bought out of Proper 12 whiskey company
Longford leaving cert schools Europe's finest with measured masterclass
"No one comes into racing for money – it is a hard way to make a living" - Elliott releases heartfelt statement
QUIZ: How well do you remember the 2010 World Cup?
Ugo Monye's Lions XV features two Ireland players and Welsh captain
Mike Haley magic and Bundee's blunder sees Munster reach PRO14 Final
"There's 30 pints of Guinness on the table! The night before a World Cup quarter final"
You may also like
1 day ago
"The minute it left my boot, I knew it was going over" - Tipp's 2020 pilgrimage began with a challenge
1 week ago
"Hang on lads, there is more to life outside of Dublin" - Connellan is a rebel with a cause
2 weeks ago
"If we moved we were dropped" - Good memories come flooding back for Ryan
3 weeks ago
"The more you win, the more motivated you become"
3 weeks ago
"Angry" Sligo manager McEntee calls on GAA to stand up to government and get some clarity for its members
1 month ago
"My thing was just to play the game, have the craic and enjoy it afterwards"
Next Page