On a beautiful Sunday in Carrick-on-Shannon, Ballinamore Sean O'Heslins rose to the occasion to end 30 years of hurt and for the first time since 1990, to bring the Leitrim senior football championship home.

Once the kingpins of Leitrim football, the club have endured their their fair share of heart-ache and hard-luck stories in recent times but nobody could deny them on Sunday. Not even the inspired Keith Beirne, who kicked points that have to be seen to be believed. Not even the missed chances, the dubious penalty calls or the weight of history. Not anything. 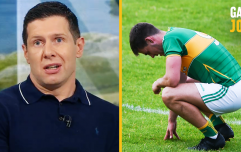 END_OF_DOCUMENT_TOKEN_TO_BE_REPLACED

Stalwart Wayne McKeon dropped to his knees at the full-time whistle and having looked to him for guidance, leadership and composure all day, that was the signal to the people of Ballinamore that they could breathe again.

They could breathe again as county champions, this time for the 21st time but of the 20 that went before, this was sweeter than them all. This was sweeter than any nut they've ever cracked because while 30 years is a long time for any club, for a club of their tradition, class and history, it's more of a nightmare. The nightmare ended here because of the McGoverns, Niall, who kicked 1-1 when the game was in the fryer and Dean, who had tears in his eyes as he lifted the cup.

When they're in the pub tonight with smiles on their faces and with the cup perched on the table, they'll be talking about Tom Prior who ran the Mohill defenders into the ground. They'll say the same thing about young Luke Murphy and then they'll go all the way back to their goalkeeper who would have stopped bullets. It always come back to McKeon though, because it was his points, his aggression and his fearlessness - both in possession and out of it - that told Mohill that they'd have to go and come back another day.

What it's all about

Leitrim stalwart Wayne McKeon drops to his knees after inspiring @BallinamoreSOH to their first Leitrim title in 30 years pic.twitter.com/YhqmXHZYbl 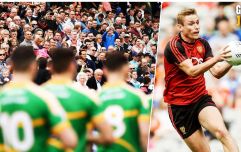 END_OF_DOCUMENT_TOKEN_TO_BE_REPLACED

The defeated can be proud of their contribution too though because on a day when the county's newly appointed manager Andy Moran made his first trip to Páirc Seán, he will surely have been delighted with all he saw.

He'll head back to Ballaghaderreen with Keith Beirne's highlight reel replaying in his mind. He'll be thinking about all the talent in the county, the bravery and the honesty that was left out on that pitch and as, after the final whistle was blown and the people of Ballinamore went wild, he'll surely have watched the pitch invasion and then have thought to himself that there's a bit of potential here.


popular
Rangers legend says he and Roy Keane didn't speak during Man United spell
The coolest customer in hand-ball hoping to carry on the family tradition for Kilkenny
Rhodri Giggs accuses Gary Neville of hypocrisy over Salford sacking
Josh van der Flier and Sam Monaghan win big at Irish rugby awards
"County football isn't for everyone" - Down captain Barry O'Hagan hits back at criticism
FootballJOE's Career Path Quiz: #6
"I think there are only five Kilkenny players who are guaranteed to start on any given day" - Cody's motivational methods

You may also like
5 months ago
"I would happily run every day. I am probably fitter now than I was in my 20s." - Leitrim stalwart not done yet
1 year ago
Leitrim decision to go behind closed doors raises plenty of eyebrows
2 years ago
'I prefer to be out the field involved a bit more in the action' - Leitrim's former goalie now a scoring star
2 years ago
Two Leitrim men awarded places on Champion 15
2 years ago
GAA JOE club team of the weekend
2 years ago
"It’s one of the proudest days of my life" - Zak Moradi on Leitrim's hurling triumph
Next Page