Kerry desperately in need of centre back to take control of defence.

The Kingdom reached the Super 8s for the second year on the spin, after winning the Munster final, but every county they face will be looking closely at how Cork shredded their defence.

END_OF_DOCUMENT_TOKEN_TO_BE_REPLACED

Tomás Ó Sé claimed Kerry have now been "rattled" by Mayo [twice] and Cork while Sean Cavanagh stated that they have 'got a runway down the middle of their defence'. After conceding three goals, and surviving three more decent goal-scoring chances, it would be hard for even the most ardent fan of the green and gold to disagree.

On The GAA Hour, host Colm Parkinson looked back on that Munster final with former Meath forward Cian Ward and Conan Doherty. While some of Kerry's attacking play was praised, all three agreed their defence has proved severely lacking in steel, and nous.

"Kerry are more than happy to go with three up front, one on the 45, and the others who are supposed to be working hard and defending," said Parkinson. "They're just not able to do it.

"I would have blamed [Jack] Sherwood on a lot of those [Cork attacks] ones as what was he doing, as the spare man, to allow those Cork defenders to bomb forward."

Ward blamed many of the Kerry defence for 'blindly following their men' even when they are running into areas where they are not a threat. "You have to sometimes make the decision," he said, "to leave your man and plug a gap. Maybe it gets recycled and your man kicks a point, but it is something you have to consider it, as that is what you have to do to stop conceding goals." 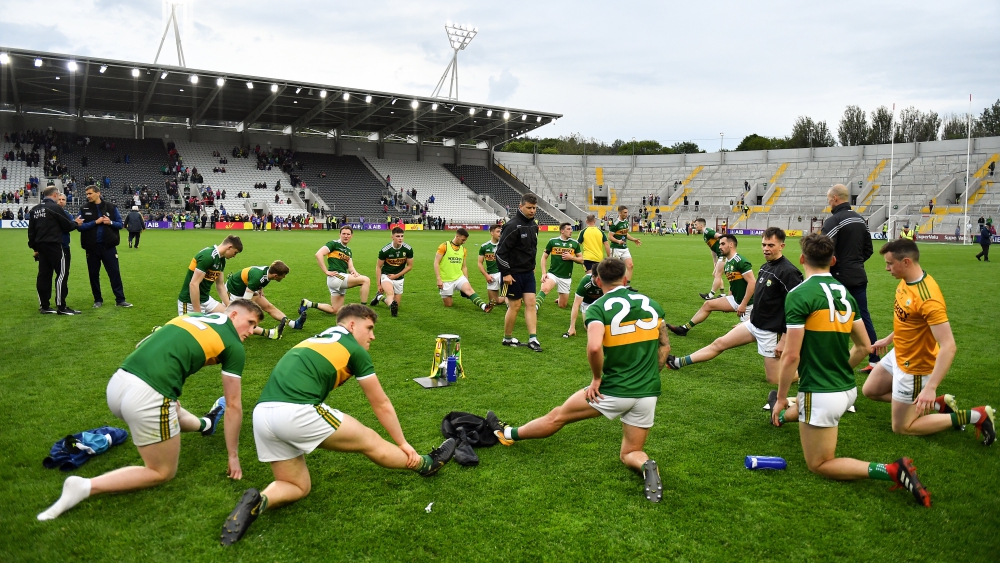 The Munster cup sits in the middle of the Kerry squad as they warm down after their final win over Cork at Páirc Ui Chaoimh. (Photo by Brendan Moran/Sportsfile)

After Parkinson claimed many of the current Kerry team 'are not good, instinctive defenders', Doherty expanded on the penchant for worrying only about the player they are marking.

"They are not a defensive unit. There is that attitude in Kerry - if it's not my man, it's not my problem.

"And that is why they are following their man out to the sideline, even if there is someone coming straight through the middle. That is why there is none of that passing off of players or guys staying in their zones."

Parkinson pointed out the one area The Kingdom are desperately lacking.

"I think it is a huge problem. They have no convincing leader of a centre-back, because he usually orchestrates things. He is the middle man; the one. They have no centre back."

END_OF_DOCUMENT_TOKEN_TO_BE_REPLACED

Agreeing with that, Ward added that Kerry were in need of a Cian O'Sullivan style player. O'Sullivan, he feels, dictates how the Dublin defence operates, getting wing backs to tuck in and midfielders to drop back, and more, if required.

Finding a lynchpin in the middle of a championship summer.

That may be too mighty a task, and search, for Keane to accomplish this time out. You know, though, that it is on his mind and that he will be focusing on his defence in training over the next fortnight, before the Super 8s commence.

You can listen to the Dublin chat, and much more from the show right here.


popular
Predicting the 31 biggest knock-out championship games around Ireland this weekend
Shane Lowry on his Tuesday duels with Rory McIlroy at The Bear's Club
QUIZ: Can you name the sponsors of all 32 of these old county jerseys?
Roy Keane linked with Championship job to replace ex-teammate
Erling Haaland's Man City release clause doesn't even exist, says Guardiola
"I think Wexford football is in trouble if something is not changed" - Banville criticises Wexford lay-out
Two Man United players led a furious half-time inquest into Manchester derby performance
You may also like
2 months ago
Finian Hanley take on contentious Kerry free may settle some Galway arguments
2 months ago
Darran O'Sullivan on the post-match gesture that shows what Jack O'Connor means to Kerry
2 months ago
JJ Delaney on how Brian Cody kept him grounded after Hurler of the Year honour
2 months ago
"We were known as stab city, the butt of everything. Of all the things JP has done, he has made everyone so proud to be from Limerick"
2 months ago
McCarthy still harder than a brick wall
2 months ago
"He was getting a bit disillusioned" - How Damien Comer rediscovered his fire
Next Page