Clare overcame an eight-point deficit to come back and claim their first championship win over Tipperary at Thurles in 90 years on Sunday.

Clare were trailing by one point heading into the final few minutes before Podge Collins scored to tie the game up with Peter Duggan then tagging on two more scores to seal the historic win.

Clare players were immediately mobbed by backroom team members and supporters as they celebrated their first win over Tipperary in nearly a century.

After the game Duggan praised his side's heart to claw their way back into the contest and he also thanked the travelling Clare for their support at the match.

"It took us a while to get going but during a good few stages in the game Tipp were well on top of us," Duggan told RTE Sport after the match.

"It shows the heart that's in this team that we still came back. We dug deep. Every time they got a score we dug deep and we came back. 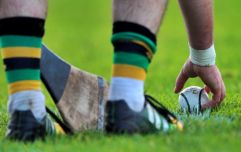 Quiz: Can you name every county to win a hurling All-Ireland without making a mistake?

END_OF_DOCUMENT_TOKEN_TO_BE_REPLACED

"It's brilliant to get a result. It's the first time in a long time we've got a result down below in Tipp and you can just see here the amount of people.

"Clare haven't travelled greatly over the last couple of weeks and the last few years since 2013 [Clare All-Ireland SHC win] and it showed with the crowd that came out here today. It really helped us.

"To hear the Banner roar for the first time in a long time really helped us drive on in this game."

popular
The SportsJOE 12 o'clock quiz | Day 139
"There's times I do think I probably have let people down but in fairness, I have got good support from back home"
Goal disallowed in Dublin SFC because player wasn't wearing his gumshield
The SportsJOE 12 o'clock quiz | Day 137
The SportsJOE 12 o'clock quiz | Day 138
All hail Alexis Sanchez, the man who played Manchester United like a piano
Premier League referees to use pitch-side monitor for VAR next season
You may also like
1 year ago
14-man Tipperary show heart of lions to break Wexford's
1 year ago
If you can name every stadium in our GAA ground quiz you deserve an All-Ireland medal
1 year ago
Only a true GAA expert will get full marks in our county crests quiz
1 year ago
Limerick fan charts epic journey from Dubai to All-Ireland glory in Dublin
1 year ago
Declan Hannon praised for change of position, and change of heart, that drove Limerick on
1 year ago
Limerick's gesture to injured Paul Browne did not go unnoticed
Next Page