Sunday didn't seem like the day Rory Beggan would have to get used to this.

He's the best goalkeeper in the country now and he's there to be shot at. Anything he does that even resembles an error will result in the Dublin diehards and those who just love to stir the pot circling and hounding him

But he came through Sunday scot free.

Two days after he won his first All-Star and Rory Beggan was flawless in the Ulster club quarter final for his club Scotstown. From the goals, the Farney man played the field.

He kept a clean sheet, kicked a point from play and notched a few frees for good measure too.

Is there anything Rory Beggan can't do?

Even more tellingly than the point from play, Beggan carried out his goalkeeping duties to military precision. The point from play is a rarity that creates headlines. With Beggan, the constant is the kicks that leave his boot like a missile in a hurry but still always land wherever on the earth he wants them to.

Burren were burned by this nerveless and faultless distribution and Scotstown were saved by it.

"Rory Beggan taking goalkeeping to an entirely different level in Pairc Esler. Playing like a man who won an All Star at the weekend," said Down legend Mark Poland.

Rory Beggan taking goalkeeping to an entirely different level in Pairc Esler. Playing like a man who won an All Star at the weekend.

END_OF_DOCUMENT_TOKEN_TO_BE_REPLACED

And he still got some criticism for it.

It's a little reminder for Rory Beggan of who he is now and where he stands now that there were still a few people with the brass neck to criticise him.

One man who's proud of his brass neck is Joe Brolly and with the Derry man present in Páirc Esler for the game, he couldn't help himself.

With praise raining in on Beggan from all angles, lauding his scoring return and eulogizing about his rocket kickouts, Joe Brolly tried at least, to bring him down to earth.

"He did a quick one two and popped it over. Spends a lot of time standing out around the middle. If he tried that against Crossmaglen Rangers they’d score about ten goals," he tweeted. 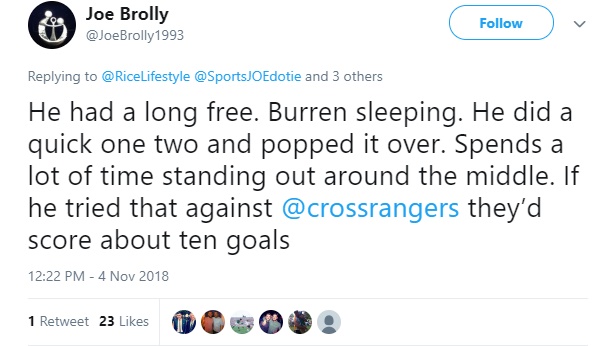 We're all well aware that the king of exaggerating is probably only exaggerating for extra effect here. Joe Brolly knows well that a class act like Rory Beggan will sit back when he has to and when he should.

But it's still funny that no matter what, there's always one.


popular
Conor McGregor bought out of Proper 12 whiskey company
The SportsJOE 12 o'clock quiz | Day 312
QUIZ: How well do you remember the 2010 World Cup?
Longford leaving cert schools Europe's finest with measured masterclass
"No one comes into racing for money – it is a hard way to make a living" - Elliott releases heartfelt statement
Ugo Monye's Lions XV features two Ireland players and Welsh captain
When Phil Healy starred in the best comeback of all time featuring the greatest commentary ever

You may also like
8 months ago
Umpire Garland taking learnings and criticism from behind the goals
1 year ago
You'd love to have Niall Kearns on your team
1 year ago
Magheracloone: Back from the brink
1 year ago
How Monaghan club recovered from losing it all in a tale of determination and unity
1 year ago
Ciaran Thompson's joke of a left peg shows Naomh Conaill can do it every way
1 year ago
Defenders do everything right yet Conor McManus kicks boomer off balance and off the left
Next Page