Liam Irwin grabbed Mayo's fifth and final goal against Cork on Saturday to secure the counties first EirGrid All-Ireland U21 football championship in a decade.

Mayo ran-out 5-7 to 1-14 winners over the rebels in Ennis, with midfielder Matthew Ruane picking up the EirGrid man-of-the-match award.

Ruane, who played an absolute blinder during his county's goal-scoring fest paid a special tribute to former teammate Darragh Doherty after picking up his award. After the match, he told TG4 that the team will "remember their good friend Darragh", who tragically died at the age of 19 last year in a road accident. 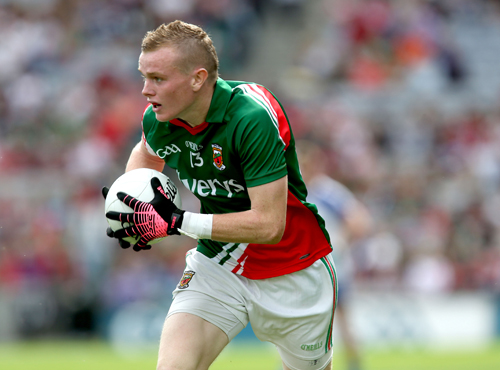 Doherty, who played an integral role in the 2013 minor team's All-Ireland win, lost his life last August after the car he was driving crashed on the N-84, at Carrowmore.


popular
The most Stone Age tackle you've ever seen gets South African lock straight red card
Galway fans' frosty reception for Davy Fitz doesn't make any sense
Ryan Manning hacked to the ground by Henri Lansbury in ruthless assault
'Brian was a genius... he would've killed you to even win a game of touch'
"Johnno went, 'We’re not moving! You're trying to mess us about!'" - Ben Kay recalls red carpet controversy
"Some of the generals wanted me executed" - Irish rugby legend on flag caper that went wrong
Final question of Ryder Cup press conference has Team USA in all sorts of trouble
You may also like
4 days ago
"Jesus, the man deserves an All-Ireland medal, but it doesn't look like he's going to get one now"
5 days ago
"There were murmurs that he didn't have it on the big days" - McCurry's redemption
5 days ago
James Horan stuck in a moment he can't get out of
6 days ago
O'Hora the unluckiest absentee as The Sunday Game names its team of the year
1 week ago
It won't mean much but Pat Spillane's compliment to Mayo and to Lee Keegan says it all
1 week ago
"I just had to get myself back to Dazzler. I think I did that." - McCurry dazzles again
Next Page