The international rules is just around the corner.

There's a lot of differences in it, the athleticism, the tackling, the scoring.

Players have to make serious adjustments to their games, forget elements of GAA that is drilled into them for a couple of matches and re-learn the whole thing.

END_OF_DOCUMENT_TOKEN_TO_BE_REPLACED

Well, that is unless you're Conor McManus.

Manager Joe Kernan was speaking at the announcement of Eirgrid's sponsorship of team Ireland as they travel down to Australia and he made it very clear that he had no plans to change anything about McManus' playing style.

When asked about if he'll be looking for athleticism over technique when announcing his squad, Kernan made it very clear where he stood on the matter:

“He’s the best finisher in the country and I talked about Bernard Brogan earlier on there, you’re not going to change those boys but it’s the way you get the ball to them.

"Make it easier for them that the ball goes in better.

"The boys that have the pace, between the two 50s, that is where these engine boys are and that is where (Ireland’s three AFL players) will be." 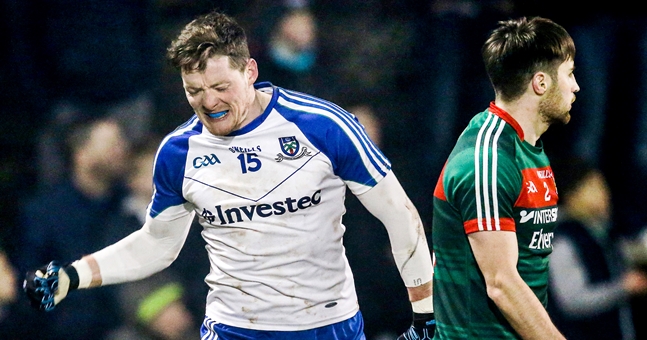 Kernan is optimistic about the fighting spirit of the side that will go over to Australia saying that they've always represented themselves well:

"Any Irish team that has gone over, they never lay down even in the last two years or four years we didn’t play well but we finished strong."

The side is set to be without Lee Keegan when they travel to Adelaide and Perth as the Westport man ruled himself out through injury but there will still be plenty of Dublin and Mayo players on show:


popular
Ireland team to play Wales: Andy Farrell's XV, the big calls and bold cuts
Everton release brutal 59-word statement to confirm Anthony Gordon departure
Jaden Sancho can't hide his smile as Old Trafford give heartwarming reception
Five confirmed changes and guidelines to have big impact on 2023 Six Nations
"Every team did it!" - Paul O'Connell on Roy Keane comment to Ronan O'Gara that he couldn't deny
Owen Farrell praises Johnny Sexton in revealing interview ahead of Six Nations
"It's crazy to think Bundee Aki might come straight in and start against Wales"
You may also like
5 years ago
Dublin players were involved in the International Rules WhatsApp group
5 years ago
Australia rub salt into the wounds after bad week for Irish sport
5 years ago
PICS: A lot of empty seats at second International Rules test in Perth
5 years ago
Conor McManus description of International Rules is reason for it never to be scrapped
5 years ago
Viewing figures for International Rules don't make for good reading
5 years ago
WATCH: Niall Morgan takes huge mark, burns two Aussies, picks out glorious pass
Next Page