Laois fought the fight of their lives but Tipperary did just enough. Cork looked at times as if they were about to run riot against Kilkenny but as they so often do, Brian Cody's team steadied the ship when it mattered. If the Rebels had gotten enough ball into the dynamite Patrick Horgan, they could well have.

But they didn't. Their under-use of their Glen Rovers gem was criminal as was the manner in which they faded out of the game in the second half. The Cats do deserve credit though. They're never ever a beaten docket and when they do get a run on you, they will most definitely make you pay.

A huge positive for them was to return to form of both Richie Hogan and Wally Walsh. The Danesfort dynamo picked off a few trademark scores while Wally turned the game upon his introduction.

At the back, the restored and revitalised Conor Fogarty was insatiable and he was without a shadow of a doubt Kilkenny's best player. Such an honest, brave and hard-working hurler, what's often underestimated is his economy in possession.

Behind him, Paul Murphy was safe as a house. As for Cork, Darragh Fitzgibbon's first half alone earns an inclusion. He was everywhere in 35 manic minutes and he really is one of the country's brightest young hurlers.

Horgan meanwhile, his scoring feats are beyond comprehension at this stage. The best forward in the country, one of the best ever in this kind of form.

Alongside him, Alan Cadogan caused untold problems for Padraig Walsh.

As for Tipp Laois, the Premier didn't do too much, but they did enough. Flynn, Ronan Maher and Noel McGrath were their best performers. For Laois, Ryan Mullaney did as well as he possibly could on Seamus Callanan, another of the game's lethal forwards.

Then there was the minor game where Sean McDonagh - from Galway Junior hurling club Mountbellew/Moylough tipped the balance in their favour. He hit 1-6 against Kilkenny in a tremendous display. 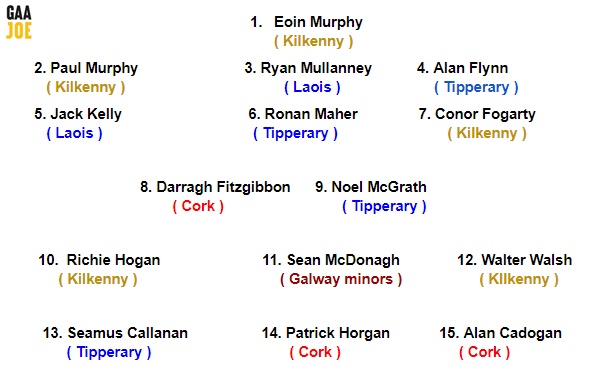 The hurling team of the weekend brought to you by Centra #WeAreHurling.

Despite the red card, Laois never threw in the towel

A credit to their county

Cody and Kilkenny still the masters

Laois out with their heads high


popular
Carragher pushes all the right buttons and Keane delivers in gold
Conor McGregor's next fight narrowed down to two options
Jermaine Jenas' reaction to Eamon Dunphy punditry is absolutely hilarious
Tyson Fury's official purse for Deontay Wilder fight revealed
"At the end of it, you're just saying, 'thank God I didn't block that ball down'"
Joe Canning's gym routine features four very simple exercises
"People who tell you they're not scared, they're lying to you" - 'Wonderboy' Thompson
You may also like
3 weeks ago
Tipperary make statement of intent with battling draw against Dublin
3 weeks ago
"I'm nearly the nan now at this stage!" - Aishling Moloney
4 weeks ago
GAA JOE club hurling team of the year
4 weeks ago
"I just love the responsibility, the more of that, I'm well able to handle it"
4 weeks ago
In defeat, Jerry Kelly dies with his boots on in coming of age final display
1 month ago
"You don't want to change a winning formula" - Maher and McCormack the key for Borris-Ileigh
Next Page