Another Conor McGregor victory and again the debate is opened: Is he the greatest Irish sportsperson of all time?

It is of course a matter of opinion, with those who dislike MMA as a sport instantly dismissing McGregor's claim, but it is always interesting to have these debates after any major sporting achievement - it it all part of the fun.

One thing that is undeniable is the widespread appeal of McGregor, with everyone from international footballers to pop stars tweeting their congratulations in the wake of the Dubliner's impressive second round stoppage of Eddie Alvarez at UFC 205.

Four-time All-Ireland hurling final referee Brian Gavin was among those captivated by McGregor's exploits and, true to form, the Offaly man used a GAA analogy to spell out the dominance 'The Notorious' enjoyed over the now deposed lightweight champion.

It was like Kilkenny hurling again Leitrim different class McGregor

Having knocked Alvarez down three times in the first round alone, it was fair to say McGregor was competing in a different sport to his stunned rival. Gavin saw it as an unassailable gap. 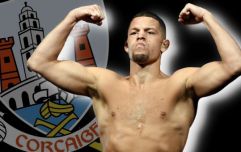 END_OF_DOCUMENT_TOKEN_TO_BE_REPLACED

Why poor old Leitrim though? Their near neighbours Sligo were statistically the poorest hurling team in 2016, in the league at least.

One man suggested the gulf in class was more equatable to the Leitrim footballers taking on their near mythical Kilkenny equivalents.

it was letrim football against Kilkenny football, different class!!

Another reply was unhappy with the adoration of the Cats from an intercounty referee.

Time to get the head out of the KK rectum area Brian. In present day it's more like Tipp v Waterford in the Munster Final 😀😀

However the final word goes to Leitrim footballer Emlyn Mulligan, who points out an Offaly hurling fan has some neck bringing up any county's performances against Kilkenny.

Ya could easily have compared it to yourselves against Kilkenny this year🙈😂 https://t.co/3gWYg6dHZH

You can see his point...

Offaly fans look away, 6-20 to 0-14 the final score in the Marble City as Kilkenny run riot.


popular
Justin Gaethje tells Conor McGregor to wait his turn
QUIZ: Correctly identify these World Cup 2014 players from their stickers
The SportsJOE 12 o'clock quiz | Day 73
QUIZ: Can you name the Football Italia cult heroes? | Part 2
The SportsJOE 12 o'clock quiz | Day 72
SportsJOE 2000s Football Quiz | Round 3
"If we had Jurgen Klopp, we would be 10 points clear"
You may also like
2 days ago
Justin Gaethje tells Conor McGregor to wait his turn
3 weeks ago
McGregor the fighter just couldn't help himself
3 weeks ago
"I'll go to Ireland; do what I gotta do" - Gaethje has plans for McGregor after title fight
1 month ago
"Donald showed up; Cowboy wasn't there. The wrong guy showed up"
1 month ago
"There's never been a rivalry as poisonous. It's an evil kind of buzz"
2 months ago
"I know a good, tough fight when I see one and we have one on our hands" - Conor McGregor
Next Page