"I put on about a stone and a half"

Derry minors played Tyrone minors in the recent Ulster semi-final, with the Oak Leafers coming out on top, nearly a year on since the game was originally postponed due to COVID.

However, the main talking point on social media after the match was a photo of Derry's 18-year-old monster in midfield, Dan Higgins.

END_OF_DOCUMENT_TOKEN_TO_BE_REPLACED

The sheer size, strength and power from the young Magherafelt man, led to many asking the question, "How is this lad only a minor?"

Unfortunately for Kerry, who Derry will face in the All-Ireland minor final this Sunday, Higgins isn't a ringer and actually only turned 18 last April. The reason for his impressive build is simple - hard work!

"I would have always been tall and a good runner, but I started the gym at around 14 years old, just doing body weight stuff. I never really did weights, but it was still probably more than most were doing at that age.

This chap is a Derry minor. I repeat, he's u18. Holy shit pic.twitter.com/B8hyxUZHat

"We got weights in the house at the best time possible, just before the first lockdown happened. I would never have consistently went to the gym until that lockdown, and obviously nobody had anything to do, so I started going properly.

"I put on about a stone and a half in a year and a half or so, but I'm not actually as heavy now as I was then. With the season started, I don't go to the gym as much as I did and I actually lost a bit of weight.

END_OF_DOCUMENT_TOKEN_TO_BE_REPLACED

"I go to a fella Oliver Cummings, in a gym in Maghera and he has us doing mostly in-season stuff. You don't want to be lifting too heavy during the season because it can make your legs fatigued, while in off-season you can obviously go heavier."

For the old school traditionalists out there shaking their heads and barking "sure you'll be too slow with all that muscle, you can't kick a dumbbell over the bar, blah blah blah," - you won't be able to escape the fact that Higgins is flying at the minute.

"I'm definitely not slower. I got faster because of all the leg strength work you do, you just have to know what you're doing in the gym, especially for Gaelic, and as a midfielder I need to be able to run a lot, and be as fast as I can. 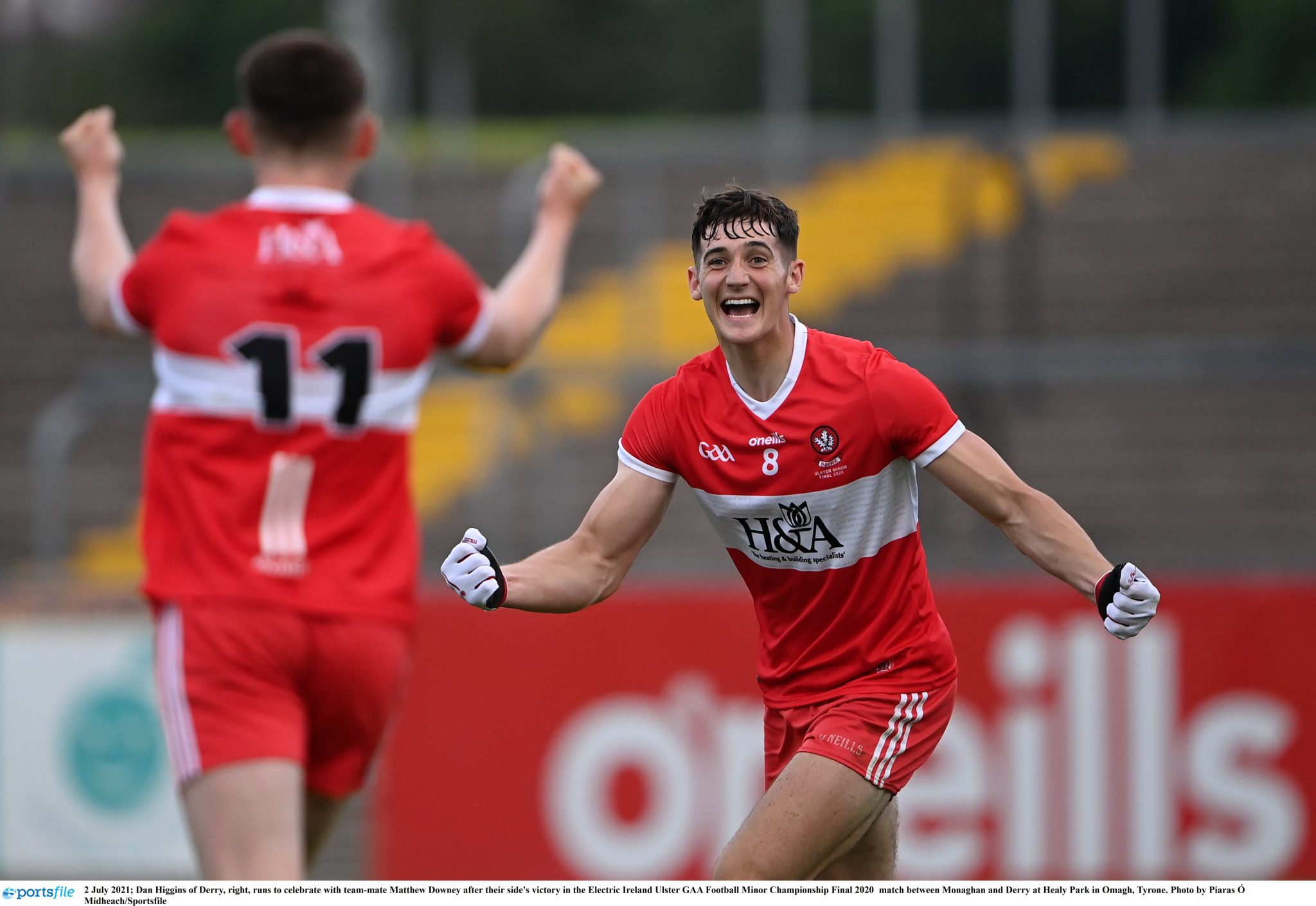 "When the pitches weren't open I was still able to do all my running on the roads because I live in the countryside, and Derry minors gave us a running programme to follow too.

"In the gym I would do all the basic stuff - so squats, deadlifts, pull-ups, RDLs, split squats - and it's important to work lateral movements, so maybe side lunges with kettlebells, because there's a lot of twisting and turning."

It's not easy fitting all of this into a busy schedule. The teenager just finished his A-levels in May, works part time as a lifeguard in the Splash waterpark in Moneymore and of course, is on the football pitch most nights preparing for the biggest game of his life.

Keep an eye out for the towering titan in midfield this Sunday, with throw-in at 1pm on TG4 - it will be hard to miss him, in fairness.

Photography from Cathal McOscar, see more of his photos here!


popular
Gary Neville reveals Man United ignored advice to sign Joao Cancelo
"I think there are only five Kilkenny players who are guaranteed to start on any given day" - Cody's motivational methods
"County football isn't for everyone" - Down captain Barry O'Hagan hits back at criticism
Boris Johnson slams Jurgen Klopp for defending Liverpool fans booing national anthem
Billy Sharp breaks silence after attack from Nottingham Forest fan during pitch invasion
QUIZ: You have 60 seconds to answer one Premier League goalkeeper question
FootballJOE's Career Path Quiz: #6
You may also like
2 days ago
If you're going into battle alongside Gareth Mckinless, then you will always have a chance
3 days ago
Rory Gallagher absolutely loses his mind celebrating as Derry beat Monaghan in Ulster semi-final
4 days ago
Monaghan will be a "different kind of challenge" compared to Tyrone says Derry boss
5 days ago
"I enjoyed it" - Padraig O'Hora opens up on his battle with David Clifford in League final
6 days ago
The All-Ireland hangover is a real thing, Dublin's dominance just made us forget about it
1 week ago
David Clifford tells Darran O'Sullivan how handles all of the pressure and attention he receives
Next Page