"It is hard, especially when you’re 18 and I’d never left Ireland by myself," - Tuohy reflects on tough days after Grand Final win

Zach Tuohy became an AFL champion in the early hours of Saturday morning and it was with the medal around his neck, and having achieved his loftiest ambition in the game, when he reflected on the tough days starting out.

It was in those days when it could have gone either way.

He was still just a teenager, back in 2009, when he was offered an international rookie contract by Carlton and in the thirteen years that have followed, with the 250 caps he has earned, Tuohy has become one of Ireland's most successful ever exports. But it wasn't all sunshine and roses and medals, as Tuohy told reporters this morning. 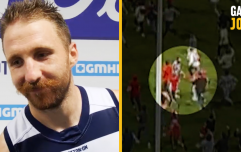 END_OF_DOCUMENT_TOKEN_TO_BE_REPLACED

There are many reasons why so few Irish players make the cut in the AFL - but chief among them is homesickness and having gone through it all, having been a teenager in a different country, on the other side of the world, Tuohy knows all about it.

“Every player has tough times, but I think the homesickness is a unique experience for the Irish guys," he said.

"Although players shift states, you can’t even pick up the phone at all times to call your family because it’s the middle of the night.

“Even that alone I think people probably don’t appreciate how hard that can be.”

“I’m lucky to be in the environment I’m in, but there were a lot of bad days early,” the 32-year-old added.

“We’re in a privileged position, I don’t want anybody’s sympathy, but it is hard, especially when you’re 18 and I’d never left Ireland by myself, much less come to Australia. 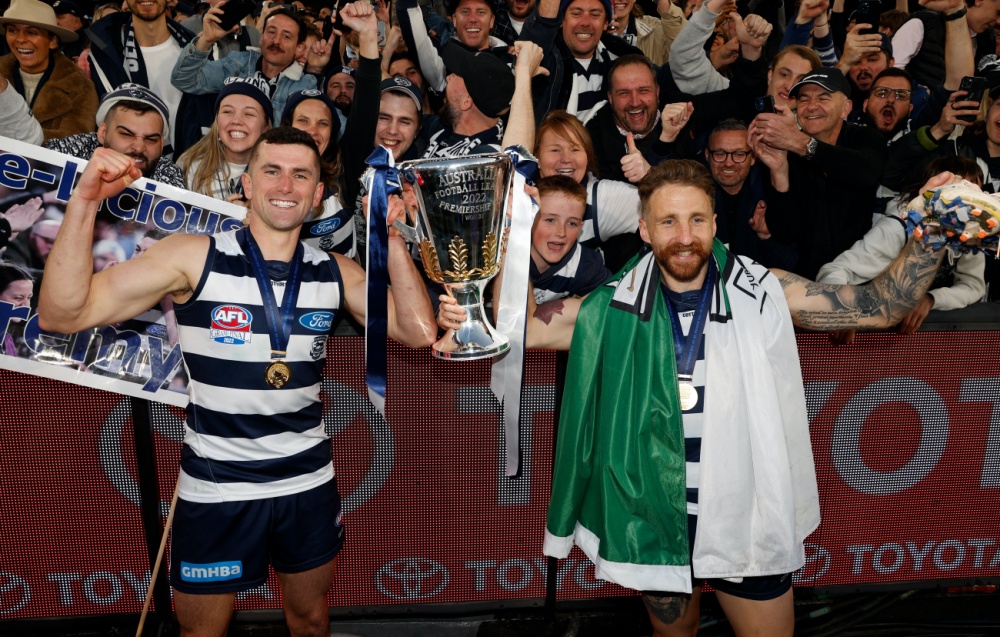 But it's on days like today when those struggles seem worthwhile. Obviously, Tuohy did it for himself, but he also did it for friends and family and you could see that there and then as he collected his medal. It was one of the big stages in world sport and there he was, shouting 'come on the town,' with a Portlaoise GAA flag draped around his shoulders for the world to watch. 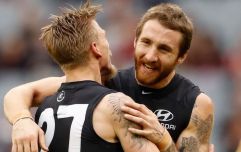 END_OF_DOCUMENT_TOKEN_TO_BE_REPLACED

“I know it (premiership) means a lot to my family especially, even more than me,” he said.

“We talked and it feels a bit like it’s full circle. I’ve got a Portlaoise flag, which is where I started. It hasn’t sunk in.

“I tried FaceTime-ing in my parents out on the ground and showed them and I couldn’t hear a thing to be honest.

“Everyone got up and watched. This is honestly as much for them and particularly my parents.

“You want good values and good people around, I’m just so lucky to have the parents I have, honestly.

“It was a 5.30 start I think. Everybody got up, all my mates got up, the extended family got up and it would have been a shame to ruin their good night’s sleep for no reason.”


popular
Roy Keane reacts to Brazil's jubilant celebrations in first half demolition job
World Cup 2022 Day 16: All the major action and talking points
Portugal boss could strip Cristiano Ronaldo of captaincy
Roy Keane handled Gary Neville’s goal celebration as most Irish fans would
Rory McIlroy explains 'falling out' with Shane Lowry that lasted a few years
Roy Keane cracks up ITV pundits with description of Senegal supporters
Ronaldo finally reveals why he got that hideous haircut
You may also like
5 months ago
Embarrassing sketch on Australian TV mocking Zach Tuohy will make you cringe
7 years ago
Irish international Zach Tuohy helps club win 9th Laois county title in-a-row
7 years ago
Laois man Zach Tuohy earns top honour for phenomenal AFL form
2 weeks ago
"The most humble person you could ever meet" - Glenswilly team-mate pays Murphy a fitting tribute
2 weeks ago
“Forged bonds that will go with me throughout my life” - Donegal legend Michael Murphy announces retirement
2 weeks ago
"I'll try get that little bit faster, that little bit fitter. I'll try to put on a bit more weight" - How Gannon aims to improve during off-season
Next Page