Cork forward Eimear Scally has praised her teammate Saoirse Noonan for her performance in the Rebelettes Munster final win over Waterford last weekend.

Noonan compiled a personal haul of 2-3 in Cork's 11-point win over Waterford as she begins to thrive in the full-forward line after a prolonged period coming off the bench.

It's been a seamless transition into senior football for Noonan but Scally was already well aware of her exploits on the pitch from the underage grades.

"The first year I played with her was last year but she would have played underage growing up but I know my dad would have been involved with the Cork minors and he was always talking about her and how skilfull she is," said Scally at the launch of AIG’s exclusive insurance offers to LGFA members.

"I was always thinking I'd love to play with her but in fairness the second she came into the senior panel she just got on with it. 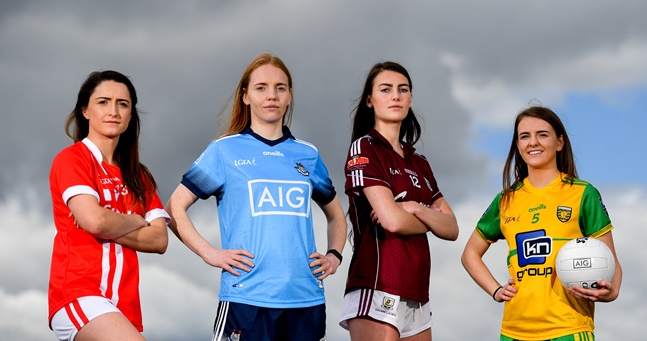 "She's so mature for her age, on the pitch anyway, but she just has such a good mind for the game. Even referring back to the league final where she passed me the ball for the point, people were asking if she passed by accident or if she meant to catch it, I said no she meant to do it. She's so good at getting the flick and she's always like three steps ahead in that way. I think that's the best thing about her game.

"Last November she had like a partial tear to her cruciate. Obviously you don't want these injuries to happen to people but it happened at a good time. She got a break for a few months and then she worked really hard to get back into the team and get her fitness up.

"Along with all of us we're just looking to build our fitness up as we have a bit of a break but in fairness she's been a revelation for us. It's just great to get her on the pitch for 60 minutes when she can."

Scally added that Cork have created an environment where young players can come in and learn and ask questions and that she's still looking up to others like Orla Finn and Ciara O'Sullivan despite spending over half a decade on the panel already.

"The girls were so understanding if you went up and asked them a question about anything whether it was football related or outside of football, anything. They wouldn’t laugh at you or anything, they’re all so understanding.

"Having the likes of Ger O’Flynn and Val Mulcahy, especially for me as a forward, having the likes of  Val and Nollaig Cleary, it was surreal to learn things off them. Attitude was always a thing that they rammed home, attitude will get you anywhere you want as long as you have the right one.

"That was always a big thing, the psychological thing, especially with Éamonn Ryan when I went in first, he was probably the one I was fangirling over the most!

"He’s such a legend and he always simplified things when you went in and always made things so simple for the younger players, and the older players, and that really stuck with everyone that he was able to say something and you catch on and you hold onto it for the game or the training session.

"I’m still looking up to the likes of Orla Finn and Ciara O’Sullivan on my team so it doesn’t stop there."


popular
Rory O'Connor gets Wexford out of jail as Shanagher throws it back
Conor McGregor sends message to new UFC lightweight champion
Burnley report Leeds' Ezgjan Alioski over gesture made towards Dwight McNeil
The SportsJOE 12 o'clock quiz | Day 352
Alisson gives moving post-match interview after scoring late winner for Liverpool
'Stop, stop, STOP!' - Texas crowd left stunned as UFC legend has arm snapped
QUIZ: Can you name these La Liga cult heroes?
You may also like
1 year ago
"It just has to stay alive" - Cork's battle to produce the goods
1 year ago
Cork physio wins hearts of the country with wild celebrations as Rebels catch fire
1 year ago
Alan Cadogan: Parts of your body is screaming, 'What the hell are you doing here?'
1 year ago
Mark Coleman turns defender inside-out before scoring ridiculous point
2 years ago
Tony Kelly returns as Clare and Cork name teams for Páirc Uí Rinn clash
2 years ago
Áine O'Sullivan scores absolutely superb lob in All-Ireland final
Next Page