A ball wasn't even pucked in Saturday's Leinster semi-final but with Covid Chaos having taken a hold of them, there was already a sense that the Dublin hurlers were up against it.

Eoghan O'Donnell's hamstring had dominated conversation and dampened expectation already but then, less than an hour before throw-in, the news landed like a kick in the stomach when it came out that Ronan Hayes, Cian O'Callaghan, Fergal Whitely and Oisin O Rorke would all miss the game.

Three of the boys were close contacts, one of them had tested positive and heading into the game as underdogs, Mattie Kenny and Dublin needed this like they needed a hole in the head. Your thoughts immediately turned to the game and what a loss, with Hayes' power, O'Callaghan's marking, O'Rorke's skills and Whitely's impact, they'd be for Dublin but when you thought about it more, you just felt for the four boys.

END_OF_DOCUMENT_TOKEN_TO_BE_REPLACED

This was a Leinster final, this was one of the biggest days of their lives and even though they may have been right as rain, they had no other option but to sit it out and watch on from home.

"Jesus you'd have to feel for Cian O'Callaghan and Ronan Hayes and the two boys," said Colm Parkinson on Monday's GAA Hour.

"When I think about this, and I know you have to be respectful to all the families who have lost loved ones, but the chances are that these three fellas (close contacts) were healthy, only they were a close contact of someone. I'd be tearing my hair out. They missed a Leinster final, and potentially not a bother on either of them. It was always to protect the vulnerable and grandparents at home and so on, but they're all vaccinated now. I don't want to get into it too much, but I just feel terrible for them lads."

Paddy Stapleton couldn't imagine how tough it must have been for them watching on from home and wonders when the time will come when close contacts aren't as restricted as they once were, given the speed the vaccination programme is travelling at.

"It is terrible. We're getting to a stage now where we're like 'when are we stopping declaring these things? When are we going to say that close contacts aren't as dangerous as they were before, and we have to get on with life. I understand, this is that middle ground now. As a lay-man, it's hard to say. But they were only going out onto a pitch so they probably wouldn't have spread it. It is a really difficult situation but I just feel terrible for them lads because provincial finals - you only get a few years at it and while Dublin have had some good years, they've also had some down years where they weren't near a Leinster final. This was a massive day for those lads." 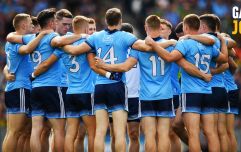 END_OF_DOCUMENT_TOKEN_TO_BE_REPLACED

"He shouldn't have started, let's be honest," Parkinson added about Eoghan O'Donnell, who had to go off after five minutes when the hamstring called again.

"The very first ball, you could see him pulling up. He ran around for a few minutes after but it wasn't right. Hindsight is fair enough but when it wasn't right, you can't play.

"I'm wondering what the thought process was behind it," added Stapleton.

"Anyone that saw him pulling up in the Leinster semi-final saw that it was pretty serious and even if it was only grade one, to me, when I ever pulled my hamstring, it's three to four weeks to be right. Okay, they did want to win the Leinster final, but when the other four were out with Covid, I would have cut my losses then and said hopefully we can get a good performance without him. I've never seen a hamstring heal in two weeks."

You may also like
1 week ago
"They definitely don't seem to have the same aura" - Dublin continue to struggle for top form in championship
2 weeks ago
"It was like a fashion parade" - When wearing a rivals' jerseys to county training used to be the norm
2 weeks ago
The GAA on TV this weekend is so good, we might just combust with excitment
2 weeks ago
"It's probably their last throw of the kitchen sink at it" - Wexford gunning for a big show
3 weeks ago
39 years old and out at centre back, Stephen Cluxton looks fit as a fiddle
3 weeks ago
"I have nothing but admiration for him" - Madden hailed for his courage and mental strength
Next Page